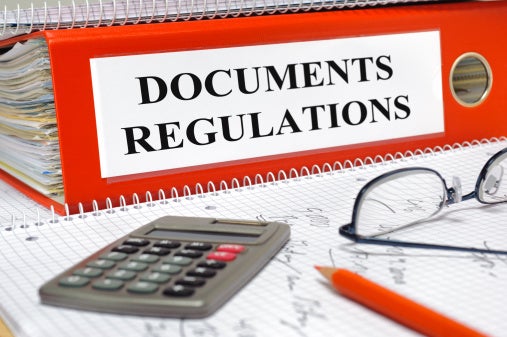 President Trump just got even more serious about reducing government regulations.
Trump just signed a new executive order that gives more teeth to an order he signed when he first took office.
The new order calls for the placing of regulatory reform task forces in federal agencies. The goal of the task forces will be to research existing regulations and identify those deemed to be burdensome on the U.S. economy for possible repeal or rewrites.
As you likely recall, Trump signed an executive order in January that directs any executive department or federal agency to identify at least two existing regulations for repeal for every new regulation the department or agency wishes to enact.
That order also asks that the costs of all new regulations put forth in 2017 be offset by the elimination of existing regulations.
Both executive orders go hand in hand, and they’re meant to help Trump deliver on a campaign promise to cut back on business regulations. Trump has said that less regulation will allow businesses to grow easier and faster.

The new executive order asks that agencies designate regulatory reform officers within 60 days and report on the progress of the task force order within 90 days.
Other presidents — including Ronald Reagan, Bill Clinton and George W. Bush — took steps to reduce government regulations. But Trump’s moves appear to be crafted with an eye toward having more of impact than earlier regulatory reform efforts. For example, moves by previous presidents didn’t go so far as to create the special task forces Trump’s latest order calls for.
The task forces will be charged with identifying regulations that could be simplified or repealed — the latter of which would have to be the case when lawmakers want to pass new rules, at least if Trump’s two-for-one executive order is to be obeyed.
The U.S. Chamber of Commerce lauded Trump’s latest executive order, while it was panned by leaders at the Natural Resources Defense Council and the Center for Progressive Reform, a think tank.
For example, according to a report by Reuters, Scott Slesinger, legislative director at the National Resources Defense Council, said the order threatens to kill safeguards people depend on for clean air, water and food safety.