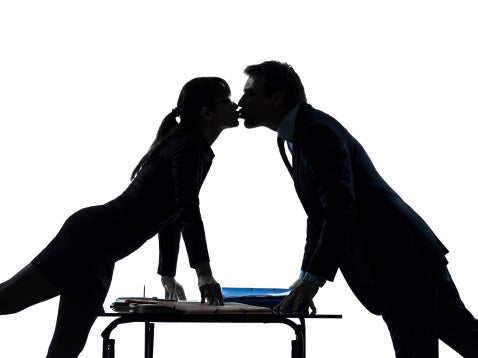 Valentine’s Day is an especially appropriate time for HR pros — and top management — to review the way they handle workplace romance.

First, a few numbers:
A Vault.com survey said 59% of respondents have participated in some form of office romance — whether it was a one-night stand, a casual relationship, a long-term commitment or all of the above.
In a CareerBuilder poll, 38% of workers said they have dated a co-worker at least once over the course of their career; 17% percent reported dating co-workers at least twice.
And 31% percent said they ended up marrying their office amour.

What the heart wants …

So it’s pretty clear that in many workplaces — from restaurants to stock brokerages to hospitals — love is in the air.
What can companies do to prevent romantic relationships between employees? Although some firms have strict anti-fraternization policies, the real-world answer is – not much.
As long as people spend time together at work, romance is a distinct likelihood. As we mentioned above, a significant number of married people meet their spouses on the job – probably not surprising, considering how much time people spend at work.
Many employers realize a blanket ban on employee dating is unnecessary and unworkable. And more and more organizations have a framework or policy for managing those relationships these days — almost three in four (72%), according to recent research from the Employment Law Alliance.
But it seems many employers steer clear of legislating workplace relationships until they present some kind of problem for individual, team or organizational productivity.
No doubt, employee dating can carry some undesired consequences: If a relationship goes sour, the breakup can lead to charges of sexual harassment, retaliation and hostile work environment claims.
Other times it’s just a matter of hard feelings, and people take sides, further polarizing the workplace.
Even if the pairing goes well, it could lead to charges of favoritism from other employees.
Here’s the latest thinking on workplace dating policies:

Not too tough to spot the pitfalls here: The boss and a direct report begin a relationship. From the moment the pair is exposed as a couple, every move the manager makes is suspect in the eyes of other department workers.
Although some employers flat-out ban manager/employee dating, many feel that’s too Big Brother – and if a top performer breaks the rules and must be fired, the organization suffers.
So the company’s penalized for preventing problems that might never have come up.
Best practice: Set up a policy that requires supervisors who become involved with a subordinate to report the relationship to upper management as early as possible.
This gives management the chance to transfer one of the parties (usually the subordinate) to another department. With that, the potential for charges of favoritism or special treatment is eliminated.

Addressing a situation when two employees start seeing each other isn’t often a manager’s favorite issue to deal with. It can feel like an invasion of privacy – after all, aren’t two grownups entitled to conduct their romantic lives however they choose?
Plus, emotions are involved. That’s often slippery ground for supervisors who are far more comfortable with cut-and-dried topics like production numbers and scheduling.
Nonetheless, it’s an issue that’s got to be faced.
Office relationships are often the focus of intense discussion – which can lead to workplace distractions and even unprofessional conduct on the part of co-workers.
Better to get everything out in the open. Managers must make sure both the romantic partners and their co-workers understand that cooperation and productivity expectations remain unchanged, no matter how personal relationships may develop.

Managers aren’t the only ones who need to be aware of the rules surrounding workplace romance – employees do, too.
Organizations that don’t provide guidance about employee relationships do so at their own risk.
While it may not warrant formal training, smart companies give employees a heads up on the kind of conduct that’s acceptable.
A couple examples:

Naturally, these rules apply to relationships that are truly consensual.
HR should monitor these situations closely because it’s possible that a supposed consensual relationship isn’t what it seems – like when a person is forced to “date” a supervisor as a condition of keeping his or her job.
If such a situation is uncovered, the company should immediately begin its normal sexual harassment investigation process.
This post is a reprint of a previous HRMorning story.