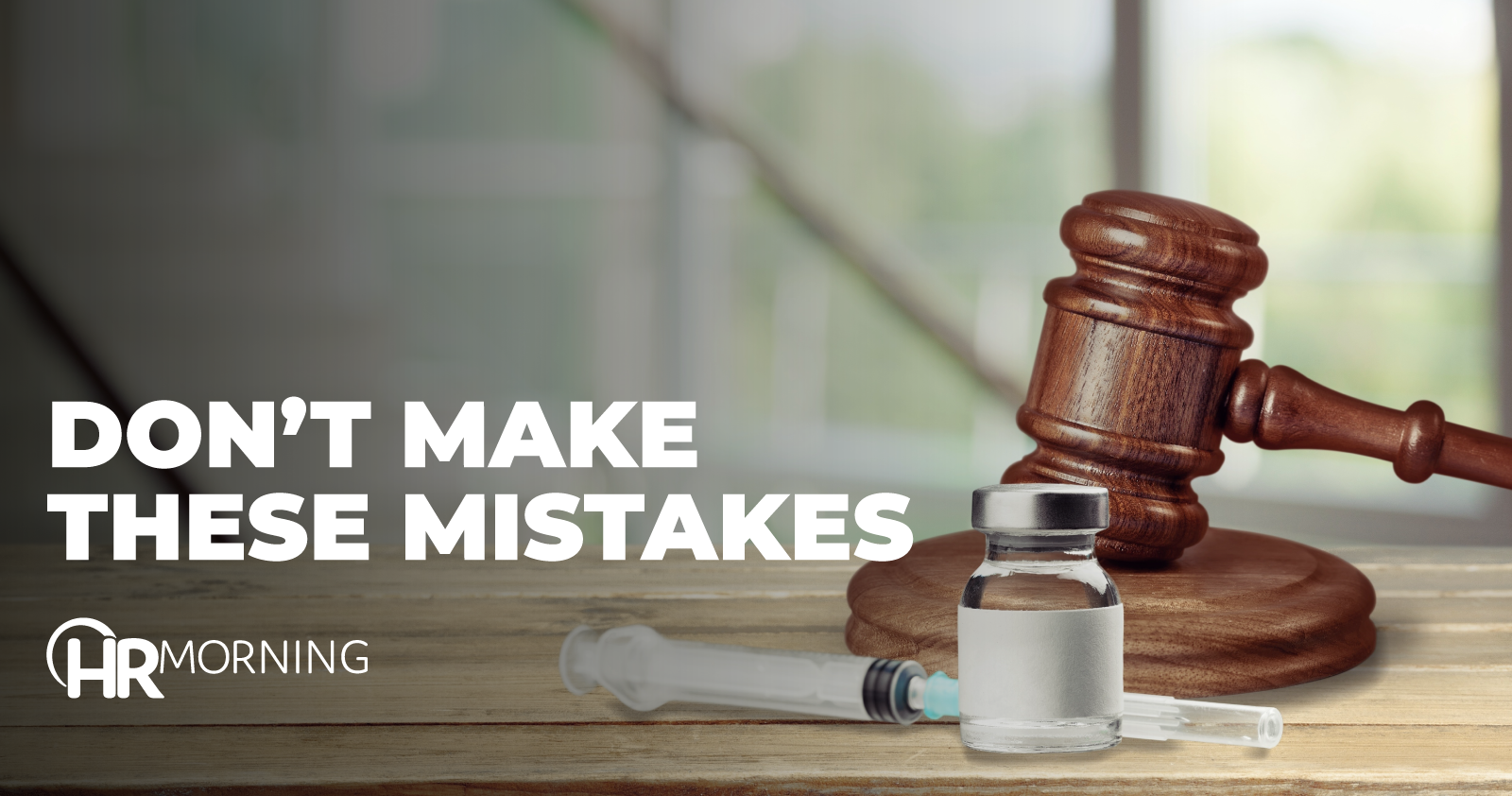 An employer might want all its workers to get the COVID-19 vaccine. But it must sometimes yield to the requirement that it accommodate legitimate requests for a religious exemption.

Employers that don’t allow for such requests to be made – or don’t evaluate them properly – can quickly find themselves smack in the middle of a big legal mess.

Case in point: The City of New York used questionable methods and standards to evaluate religious exemption requests. Teachers and administrators made the requests.

The U.S. Court of Appeals for the Second Circuit said the city’s vaccine mandate, as applied to these plaintiffs, violated their free exercise rights.

It ordered reconsideration of the requests.

In late August of 2021, the New York City Commissioner of Health and Mental Hygiene issued an order. The order generally required employees of the city’s Department of Education (DOE) to get the COVID-19 vaccine. It set a deadline of Sept. 27, 2021.

At the start of September, the United Federation of Teachers filed a formal objection to the mandate. It said the mandate did not provide for any medical or religious accommodations.

Ten days later, an arbitrator issued an award. The award set forth a process and standards to use for evaluating requests for religious exemptions.

A “religious official” had to document requests for religious exemptions. And a request was to be denied “where the leader of the religious organization has spoken publicly in favor of the vaccine.”

Requests based on personal, political or philosophical reasons were also to be denied. Only “recognized and established religious organizations” counted.

The DOE made the initial call on exemption requests. Applicants could appeal its decision to a panel of arbitrators.

A combination of 15 DOE teachers and administrators filed two lawsuits after the employer denied their religious exemption requests. They alleged violations of their First Amendment rights under the Free Exercise Clause.

A lower court denied the plaintiffs’ request for a preliminary injunction. It said they were not likely to prevail on their claim that the mandate was unconstitutional on its face.

The plaintiffs appealed those decisions. They sought an emergency injunction. During a hearing before a motions panel, the city conceded that the standards were “constitutionally suspect.” The motions panel ordered “fresh consideration” of the plaintiffs’ requests. It required the city to adhere to Title VII standards when evaluating religious exemption requests.

The case reached the Second Circuit for further review.

The Second Circuit left intact all of the interim relief that the motions panel ordered. It thus enjoined the city from terminating the plaintiffs or forcing them into an extended leave program while the employer reconsidered their requests.

The court said the First Amendment bans laws that prohibit the free exercise of religion. But it does not relieve individuals of their obligation to comply with valid and neutral laws of general applicability.

Laws that are either non-neutral or not generally applicable are subject to strict scrutiny, it explained.

The city’s vaccine mandate is neutral and generally applicable, the court said. The city needed only to show that it chose a means for addressing a legitimate goal that is rationally related to achieving that goal.

Thus, the court concluded that the plaintiffs were not likely to succeed on their facial constitutional challenge to the mandate.

A different analysis and result applied as to the plaintiffs’ claim that the mandate was unconstitutional as applied to them.

As to that claim, the court said procedures set by the arbitration award likely violated the First Amendment as applied to the plaintiffs. By providing that exemption requests would be considered only for “recognized and established” religions, the standards violated the “bedrock principle” that the government “cannot act in a manner that passes judgment upon or presupposes the illegitimacy of religious beliefs and practices,” the appeals court explained.

The standards’ requirement that religious exemption requests be denied “where the leader of the religious organization has spoken publicly in favor of the vaccine” was also problematic, the court said.

Denying religious accommodation based on the religious views of another, including the leader of a faith, runs afoul of the principle that courts are not to question the validity of a follower’s interpretation of religious doctrine, the court said.

There was also evidence that arbitrators improperly applied the standards, the court said. For example, an arbitrator told one of the plaintiffs that his religious beliefs are “merely personal” because other Christians choose to be vaccinated.

Nor were the standards generally applicable to all who sought a religious exemption, the appeals court said. Evidence showed arbitrators had great discretion in applying them and did not do so evenly, it said.

Because the accommodation procedures were neither neutral nor generally applicable with respect to the as-applied challenge, strict scrutiny applied. That meant they were constitutionally permissible only if they were narrowly tailored.

The city’s prior procedures did not meet this standard, the court said.

The criteria set forth in the procedures did not represent a narrowly tailored way to prevent the spread of COVID-19, the court ruled.

The plaintiffs also sufficiently showed there would be irreparable harm without an injunction, the court decided.

The city admitted the process was suspect. They could be terminated if they did not get vaccinated.

The court rejected the plaintiffs’ claim to immediate reinstatement with back pay. But it kept the motions panel’s order intact while the plaintiffs’ requests for religious exemptions while the employer reconsidered their requests.

Constitutional considerations come into play only with respect to government workers. But Title VII rules, which this case also implicates, apply to most employers.