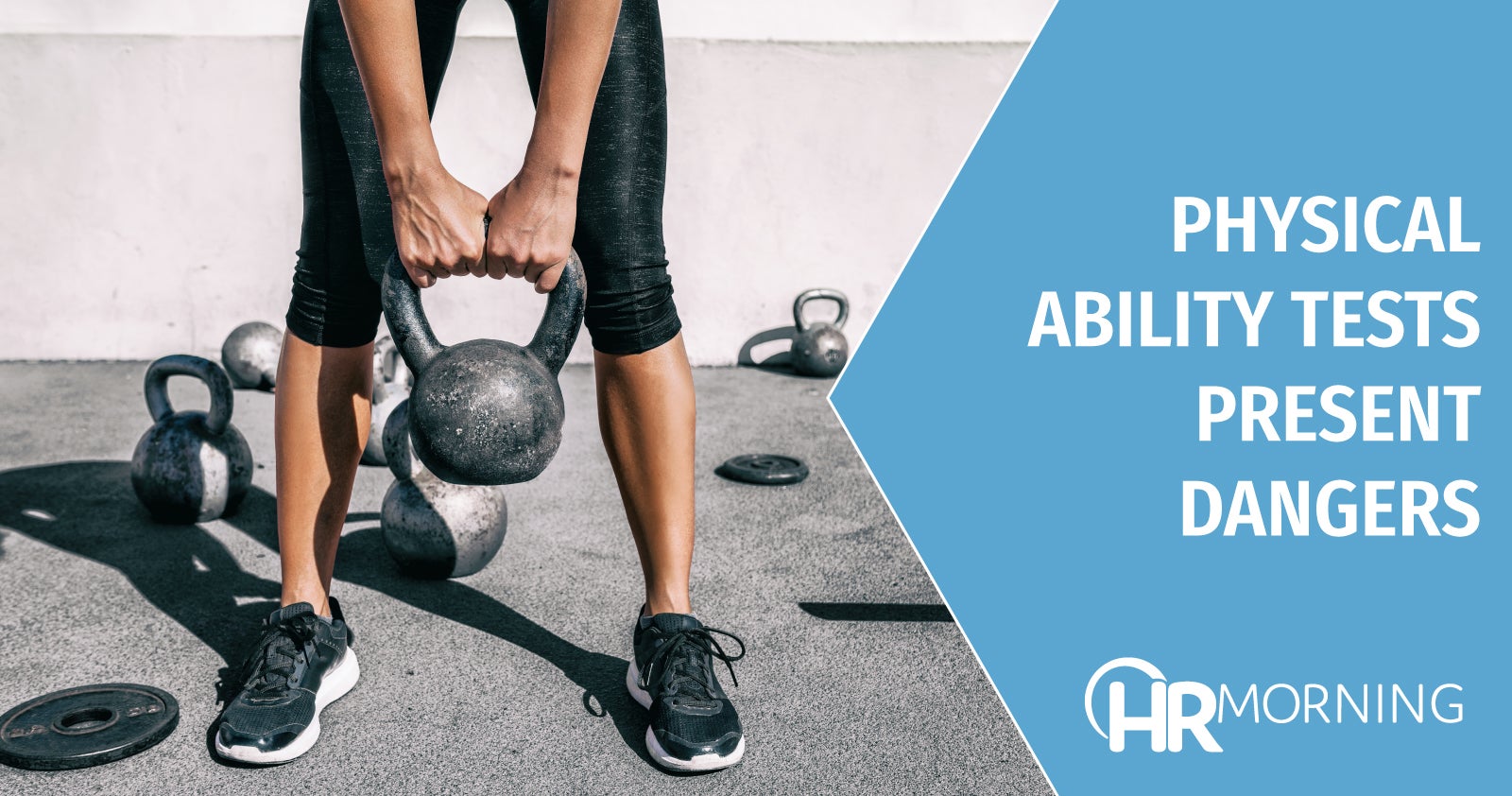 A federal appeals court has revived claims of sex and age discrimination filed by a psychiatrist who lost her job because she could not pass a physical ability test.

The plaintiff in the case is Jane DiCocco, who was 67 years old when she accepted a job as a psychiatrist at a federal prison located in Virginia.

The prison required all new employees to pass a physical ability test that was made up of five parts.

Specifically, new hires had to drag a 75-pound dummy about 700 feet for three minutes. They also had to climb a ladder to retrieve an object within 7 seconds and finish an obstacle course in 58 seconds.

In addition, they were required to run a quarter mile and handcuff someone within 2 minutes and 35 seconds, and they needed to climb three flights of stairs within 45 seconds while wearing a 25-pound weight belt.

DiCocco did not pass the test, and the prison’s policy required that she retake it within 24 hours. She declined to do so – citing her “exhausted physical condition” – and chose instead to resign.

A lower court dismissed her lawsuit. It reasoned that she did not sustain any harm that was traceable to the prison because the facts she alleged did not constitute an “adverse employment action.” Thus, it concluded that she lacked what is known as “standing” to proceed with the suit.

The Fourth Circuit review panel reversed the lower court’s ruling, finding that DiCocco has standing to raise her claims under Title VII and the ADEA.

A person has standing to sue, it explained, if they suffer an injury that can be traced to the defendant’s conduct and remedied by a favorable court ruling. To have standing, one need not establish a valid claim for relief, it added.

DiCocco easily met this test. She said she was injured by the loss of employment; she asserted that the injury was caused by the prison’s allegedly discriminatory policy requiring new hires to pass the physical ability test; and a favorable court decision would remedy her harm.

The lower court’s approach wrongfully conflated the merits of DiCocco’s claims with the threshold issue of standing, the appeals panel said.

The appeals court reversed the lower court’s ruling and remanded the case for further proceedings.

A useful — but potentially dangerous — tool

Physical ability tests can be a valuable tool for assessing the ability of job candidates to perform essential job functions. But they can also lead to legal issues, especially in cases – like this one – that say the tests have an unlawful disparate impact on women.

Title VII, the ADEA and the Americans with Disabilities Act all ban the use of discriminatory employment tests. And unlawfully discriminatory tests can sometimes include those that are facially neutral but have the effect of disproportionately excluding people based on their membership in a protected class, such as sex.

The EEOC has said that determining whether a test has a disparate impact on a protected group normally requires statistical analysis. If there is a disparate impact, employers can avoid liability under Title VII by showing that the test is job-related and consistent with business necessity.

How can employers make this showing? By establishing that the test is measuring skills that are needed to perform the job safely and efficiently.

Even if the test measures such skills, employers have an obligation to see if they can measure such skills in a way that does not produce a disparate impact on a protected group. In other words, they must ask this question: Is a less discriminatory alternative available?

Under the ADEA, an employer can defeat a disparate impact claim based on testing by showing that the test was reasonable.

How to get it right

There are important keys to using physical ability tests in a way that steers employers clear of legal trouble.

First, it is absolutely critical to ensure that the test measures skills and abilities that workers need to do the job.

Only after this information is firmly in hand should employers proceed to the step of devising the precise contours of a physical ability test.

Another important key: On a periodic basis, reassess and reevaluate the validity of the tests. Job requirements can change over time, and it is imperative to ensure that any utilized physical ability test accurately measures currently required job skills.

The cost of excluding candidates based on faulty assessment tools can be high. In one case, a transportation company agreed to pay $3.2 million to settle EEOC charges that its strength and fitness tests had an unlawful disparate impact on women. In another, Wal-Mart agreed to pay $20 million to end an EEOC suit that said a physical ability test Wal-Mart used for order fillers disparately impacted women.

Physical ability tests are valid and appropriate tools for employers, but they must be sure to take all steps necessary to avoid claims of disparate impact discrimination connected with their use.