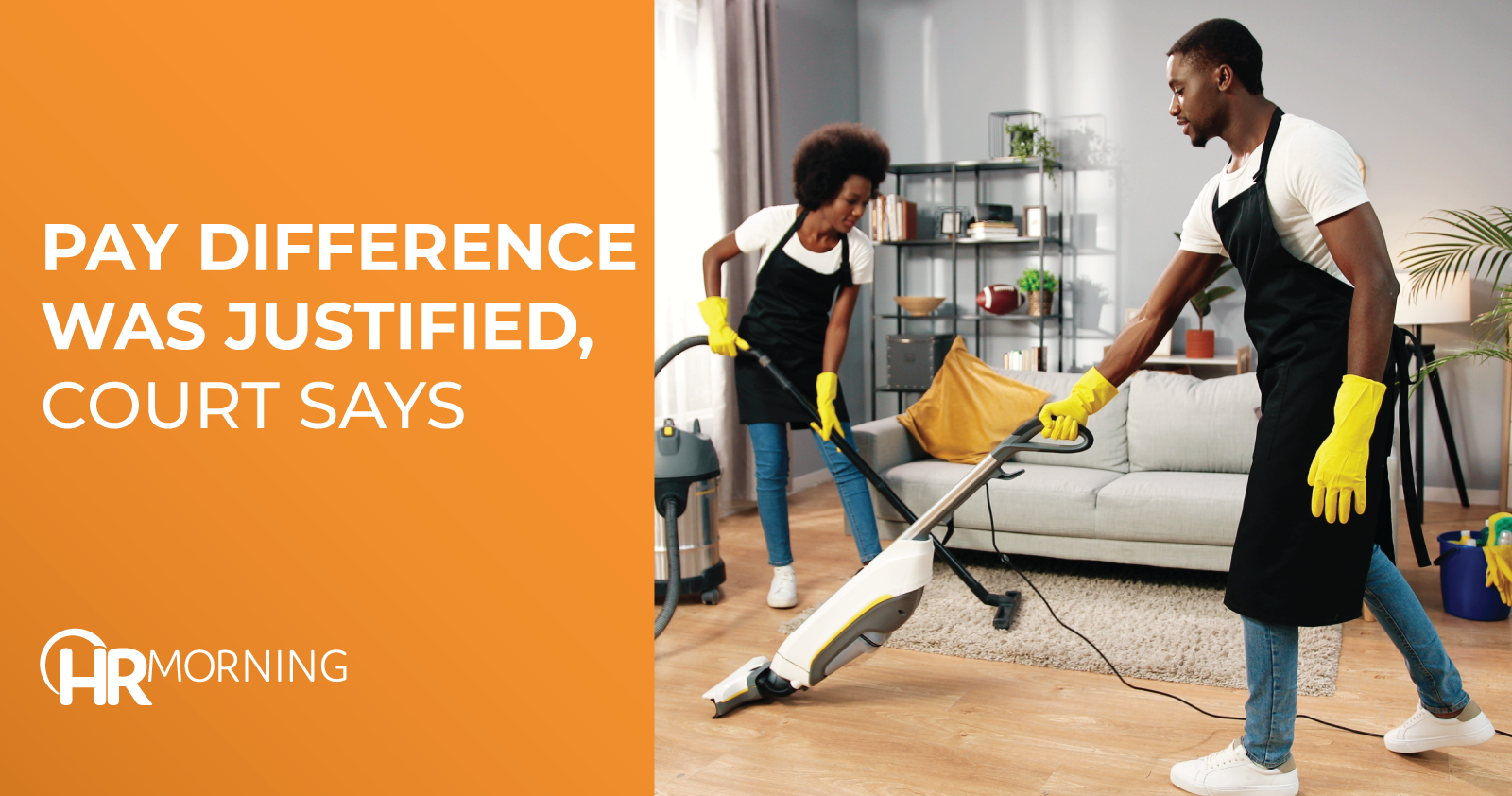 If an employer pays a woman less than it pays males, there isn’t always a legal violation.

The key question: Are the woman and the higher-paid males essentially doing the same work?

Sometimes, a pay discrepancy can be easily justified because it is clear that the jobs differ significantly.

But in other cases – like this one involving an employer in Iowa – the lines can get somewhat blurred, and job similarities can make the question a bit tougher to answer. And it is in these cases that employers must be especially ready to show that a pay difference is based on a factor other than sex.

The case involved Maria Mayorga, who started working as a general cleaner for Marsden Building Maintenance LLC in 2013. In that position, Mayorga was paid $12 an hour to perform general janitorial tasks. Those tasks included cleaning, sanitizing, vacuuming, and disposing of trash.

Although Mayorga left the company in 2014, she returned in 2018 to do the same job at the same pay rate. She was soon given more responsibility as a general manager. In that role, she inspected the work of other cleaning employees.

Mayorga took a leave of absence in December 2019. When she was ready to return, Marsden had filled her position with someone else. But it wanted to retain her because it considered her to be a hard worker.

At the time, there were two positions available: a general cleaner/floater position that paid between $9 and $10 an hour, and a “special services” position that paid between $13 and $15 an hour. The latter position involved more heavy-duty responsibilities, such as stripping and waxing floors, carpet cleaning and extractions, power washing, and cleaning grout. It required technical knowledge of machinery, and most Marsden employees in the position were men.

Mayorga’s supervisor let her choose which position she wanted, and she opted for the higher-paying special services job. But Marsden wanted to pay her at her previous rate until either another job opened up or she was fully trained on the equipment that is used in special services.

When Mayorga returned to work in January 2020, Marsden also hired two men with special services experience and paid one $13 hourly and the other $14 hourly.

It paid Mayorga just $12 an hour, saying it did so because she was not yet fully trained on all the equipment used in special services. She asked for $13 an hour, but her request was denied after the special services manager told the company’s operations manager that she still needed more training and in fact had “a lot to learn.”

She said male colleagues were paid more than she was for doing the same work. She further alleged that her employment was terminated because she is a woman.

A lower court ruled for Marsden, and Mayorga appealed.

The U.S. Court of Appeals for the Eighth Circuit affirmed the lower court’s ruling.

On appeal, the court explained that to win her wage discrimination claim, Mayorga had to show that she was paid less than a male who did a job that required equal skill, effort, and responsibility under the same conditions of work.

She did not need to show the jobs were identical, it said; she just needed to show they were substantially equal.

If she made this showing, Marsden could still win by showing the pay difference was based on:

Here, the appeals court said, Marsden satisfactorily showed that the two men Mayorga identified as comparators were paid more based on their superior prior work experience.

Marsden met its burden to show the pay difference was based on a factor other than sex, the appeals court decided.

Nor was there sufficient evidence to support Mayorga’s assertion that Marsden terminated her employment because she is a woman, the appeals court said.

Like the state law at issue in this case, the federal Equal Pay Act requires employers to pay males and females equally for substantially equal work.

In evaluating whether the work is substantially equal, examine the following factors: