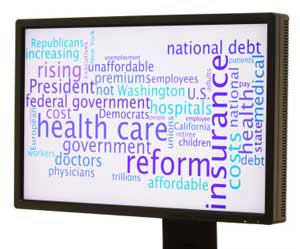 Most companies — including many small businesses — are on the hook to send their employers a heads-up about the new healthcare reform exchanges by Oct. 1. Here’s what you need to say and do to stay in compliance.

What’s the deal with these letters?

Here’s a brief rundown of the healthcare reform exchange letters:

The healthcare reform law requires employers who are covered by the FLSA (those with annual sales of at least $500,000) to provide their employees with a notice informing them of the ability to purchase health insurance in the new Health Insurance Marketplace (a.k.a., the health exchanges).

Who has to send them out?

Unlike a number of healthcare reform requirements, this one applies to almost all employers: Every company with at least one employee and $500,000 in annual revenue is on the hook for sending out these letters.

What do they have to say?

According to FindLaw’s Betty Wang, the letter should include:

In some good news for firms, the DOL has issued two model notices that employers can use to satisfy the reform exchange notice requirement.
The first model notice the DOL released is meant for firms that offer health insurance to some or all of their workers. The second notice is for businesses that don’t offer a health plan.
Also, the DOL released a revised COBRA Model Election Notice, which includes info about the health insurance exchanges, as well as a redline document that shows the changes to the initial COBRA notice.
Prior to its guidance on the exchange notices, the DOL released an FAQ that included info on changes to the Summary of Benefits and Coverage (SBCs) documents employers are required to distribute, as well as model SBCs firms can use to comply with this Obamacare provision.

The best way to communicate

Simply issuing the exchange notices without further explanation is likely to lead to some confusion.
Some other important facts you’ll want to touch on about the exchanges:

Will there be penalties?

To make things even more complicated, the Obama administration just announced, via a brief FAQ on the DOL’s website, that employers who fail to provide employees with a health exchange notice will not be “penalized.”
The ACA carries a general non-compliance penalty of $100 per day that can be slapped on employers for a number of reasons — one of which is the failure to provide the exchange notice on time.
But the FAQ, which has since been released, made it very clear no employer will be “penalized” for failing to provide the notices by Oct. 1 or otherwise.

DOL wants to assist, not penalize

In fact, in another FAQ issued by the DOL last year, the agency said its general approach to enforcement of the law will:

be marked by an emphasis on assisting (rather than imposing penalties on) plans, issuers and others that are working diligently and in good faith to understand and come into compliance with the new law.

So it appears the DOL will only impose penalties on those who blatantly ignore or refuse to follow the law.

Why issue an FAQ nixing the notice penalty — and why do it now?
The reason for easing the rules has become clear: Many small businesses (those with fewer than 50 employees) weren’t aware of the requirement. And as the deadline approached and more info came to light about the rule, the owners of those businesses started to complain about the potential non-compliance penalties attached to it.
But the timing of it remains a mystery. When asked why the FAQ was issued, a spokesperson for the DOL said, “The reason all the FAQs go out is to provide further clarity,” reported Reuters.
One possible reason for releasing the FAQ, which essentially frees employers from the notice requirement, so close to the deadline: It allows the Obama administration to reap the rewards of the rule (making people aware of the exchanges) because by now most firms are prepared to comply and will issue the notices anyway — without any of the backlash that could come from forcing small employers who were caught off guard by the rule to comply.

No penalties, but there could be consequences

The ambiguity of the new FAQ, however, has many employment law experts suggesting that while there may not be any non-compliance “penalties” attached to the exchange notice rule, there’s a strong possibility there will still be consequences for not providing the notices.
In a response to whether or not the exchange rule carries a non-compliance penalty, the FAQ says:

No. If your company is covered by the Fair Labor Standards Act, it should provide a written notice to its employees about the Health Insurance Marketplace by October 1, 2013, but there is no fine or penalty under the law for failing to provide the notice.

Benefits attorneys like Christine Roberts say that this response is actually very confusing because it says employers “should” provide the notices rather than employers “shall” provide the notices, which is the terminology used in other laws like the FLSA in regard to the notices.
And since the new FAQ doesn’t change any prior guidance on exchange notice duties, non-compliance could trigger consequences other than penalties.
For example, in her blog E is for ERISA, Roberts says the exchange notices could be viewed by the DOL as required disclosures under their ERISA covered-benefit plans. So not issuing them could open the door to an ERISA audit, she says.
Bottom line: Even though there’s no monetary penalty for failing to provide the exchange notices, the safest bet for employers is to stay the course and issue them by Oct. 1.
Portions of this story initially appeared on our sister site HRBenefitsAlert.com.