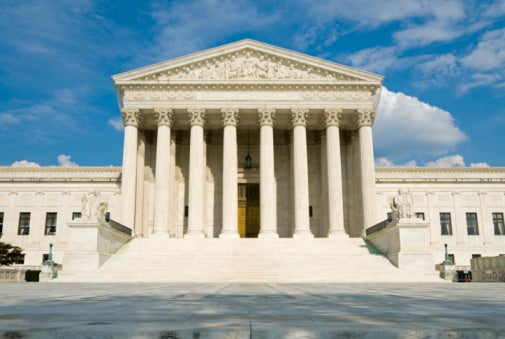 The Supreme Court has agreed to hear a case challenging the legality of Obamacare subsidies in states that have refused to set up their own healthcare exchanges.
The case, King v. Burwell, is an appeal of a July ruling from the 4th Circuit Court of Appeals, which upheld the subsidies.
The essence of the case is one phrase in the law, which says that subsidies — in the form of tax credits — would be offered in health insurance exchanges “established by the state.” But more than 30 states passed on setting up their own exchanges, so the feds stepped in to do so.
Four Virginia residents — the original plaintiffs in the case —  claim that the subsidies are illegal in the states where only federal exchanges have been established.
According to a story in USA TODAY, more than 5 million Americans would be affected if the subsidies are struck down. They have reduced monthly insurance premiums by 76% for those who qualify, federal health officials say. The average monthly premium dropped from $346 to $82.
Clearly, a ruling against the subsidy system would largely cripple the health reform law. The subsidies make the private health insurance policies offered on the exchanges affordable to most Americans without employer-sponsored insurance plans, USA TODAY said.
The nine Supreme Court justices are expected to issue a ruling by the end of June.