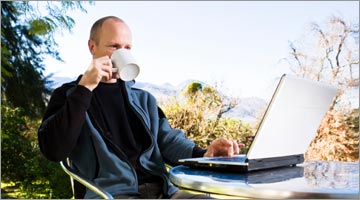 Are employees who work off-site more or less likely to have personality clashes with supervisors and colleagues?
A new study by VitalSmarts suggests that the most common workplace relationship problems occur with much greater frequency when employees are allowed to telecommute rather than when everyone works in the same building.
To make matter worse, the ways most telecommuters deal with these issues wind up being destructive to people’s working relationships and/or the company’s productivity.
According to the survey, when people clash with a colleague who works in a different location, they often cut off communications. Alternatively, they may flex their “phone muscles” and become verbally aggressive. If your company offers telecommuting, here are three ways to avoid these pitfalls:
1.  Set communication expectations early
How often are telecommuters expected to touch base with supervisors and others in their department? What’s the process for working out problems with a project or assignment? These two questions should be answered before anyone is allowed to telecommute.
2. Don’t air dirty laundry in conference calls
It’s much easier to be confrontational when you are not in the same room with other people. Another problem with phone or internet-based work conversations is the inability to see each other’s body language and the ease of misinterpreting someone’s tone of voice. Employees are more likely to gang up on a colleague when they don’t have to look the person in the eye.
Group discussions should stick to a pre-determined agenda as much as possible. It’s appropriate to discuss work-related concerns. But when telecommuters have a personal concern about a colleague or supervisor, the issue should always be raised on a one-to-one basis.
3. State the main point up front
In telecommuting environments, it’s common for people to tune each other out after a few minutes. While there’s nothing wrong with some polite chit-chat at the start of the conversation, best practice is to state the main purpose of the discussion early on.
For example, “I’d like to talk about the problem we’ve been having avoiding duplicate information going back and forth. We need to figure out how to solve problems on both  ends.”