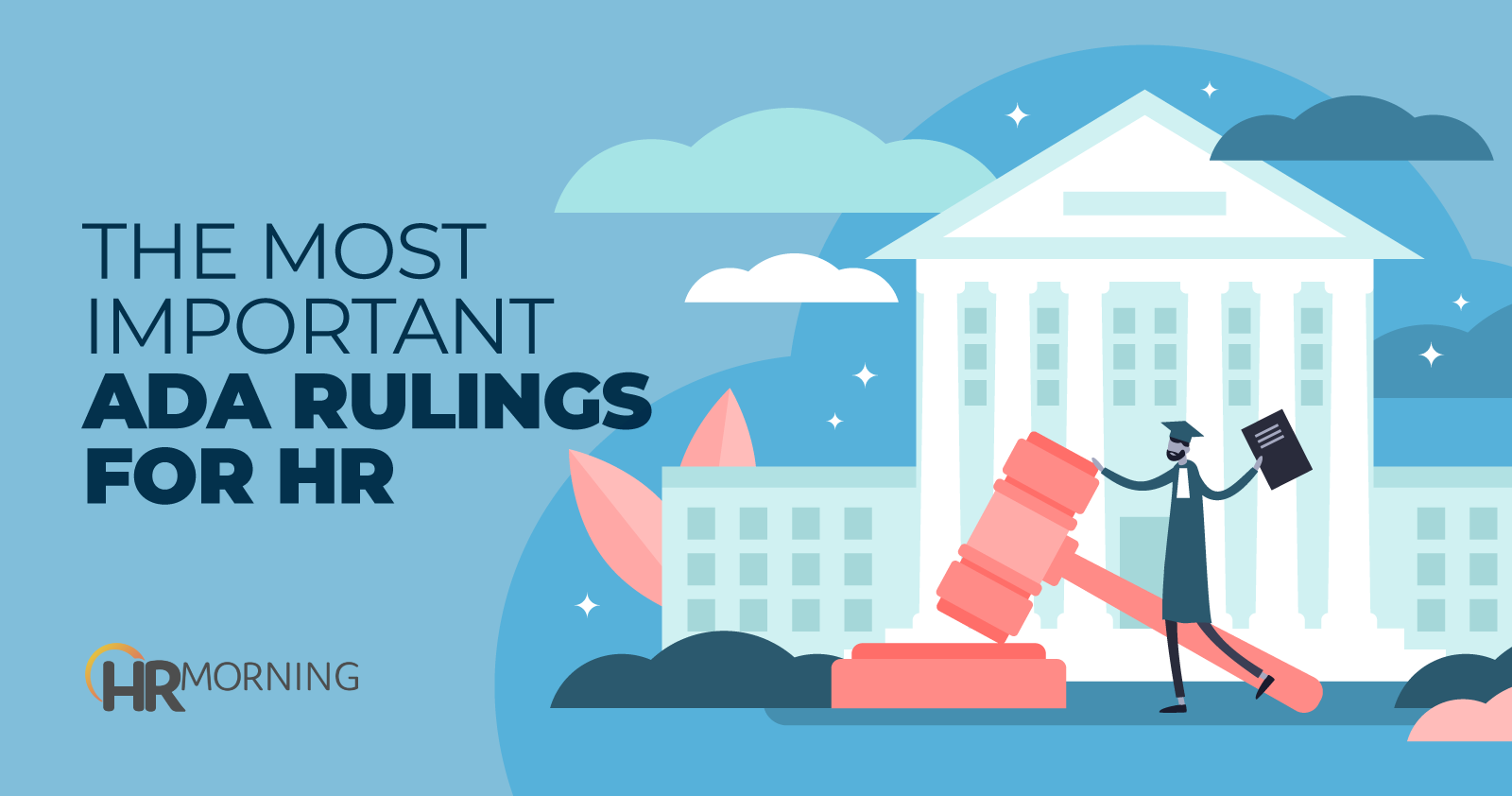 It’s been a long and winding road for the Americans with Disabilities Act (ADA) since the law was passed in 1990. From the start, the statute’s text was filled with malleable terms and sometimes equivocal language that was in dire need of clarification and interpretation. Thankfully, in the three-plus decades since the law became effective, thousands of court rulings, including rulings from the U.S. Supreme Court, have offered critical guidance concerning the statute’s employment provisions.

The first ADA case to reach the nation’s highest court remains one of the tribunal’s most important pronouncements relating to the statute for HR pros – even though it was not an employment-based lawsuit. In Bragdon, a patient with HIV alleged that a dentist violated the ADA by refusing to treat her in his office. The high court provided important new guidance on two critical questions that readily transfer to the employment setting: whether the patient’s HIV infection was a “disability” under the statute, and the circumstances under which an individual is essentially rendered unqualified because they pose an unacceptable health or safety risk.

As to the first question, the court had no trouble concluding that HIV infection is a disability under the ADA, even if it is asymptomatic, because it substantially limits the major life activity of reproduction. This finding was extremely important, because at the time of the ruling many ADA defendants were attempting to derail ADA claims early by arguing that the plaintiff did not have a qualifying disability. When this argument was successful, the core question of whether discrimination occurred could conveniently be avoided. While this ruling did not stop defendants from making the “no disability” argument, it provided plaintiffs with strong ammunition to oppose it.

In Cleveland, an employee sued her former employer for wrongful termination under the ADA. The employer defended the suit by asserting that the employee had taken a misstep that was fatal to her claim under the ADA: It said that by claiming an inability to work in connection with an application for Social Security Disability Insurance benefits, the employee essentially admitted that she was not qualified to perform her job. Only qualified individuals with disabilities can successfully pursue ADA claims, the argument continued, and this employee was not qualified.

But the claim for Social Security benefits did not inherently conflict with the ADA claim, the Supreme Court ruled. The ADA’s definition of a qualified individual with a disability includes those who may need job-related accommodations to perform essential job functions, the court pointed out, and the Social Security Administration does not take the possibility of reasonable accommodation into account when determining eligibility for benefits. At the same time, it said that ADA plaintiffs cannot simply ignore the apparent contradiction between an ADA claim and a Social Security claim of total disability. But they must be given an opportunity to explain the reason for the apparent contradiction, it ruled.

Bottom line: An application for disability-related benefits does not necessarily render an employee unqualified and preclude an ADA suit.

This case was a relatively early reminder for employers to avoid construing the ADA too narrowly, and to remember instead that courts generally construe remedial statutes like the ADA broadly.

Spoiler alert: This decision has essentially been overruled by an ADA amendment that broadened the definition of “disability” under the law. But it’s a very important decision to know for precisely that reason.

In Sutton, a group of severely myopic job applicants sued under the ADA to challenge an airline’s minimum vision requirement for global pilots.

In addressing their claims, the court decided that when determining whether an individual has a qualifying disability under the ADA, the effects of corrective and mitigating measures should be taken into account. The applicants here were not disabled under the ADA, it ruled, because they were able to correct their visual impairments by using corrective lenses.

Sutton and a companion case eventually led to the passage of the ADA Amendments Act of 2008, which essentially expanded the statute’s definition of disability. The act provides that the question of whether an individual is disabled under the ADA is to be made without regard to their use of mitigating measures – other than ordinary eyeglasses or contact lenses.

This means conditions that are controlled by medication – but can result in serious consequences without them – are covered disabilities under the ADA.

The amendments further clarified that an impairment that is episodic or in remission can qualify as a disability if it substantially limits at least one major life activity when it is in an active phase.

Understanding the breadth of the term “disability” under the ADA is a basic and crucially important point of emphasis for HR pros.

One of the most frustrating concepts for employers to grasp and implement under the ADA is the core concept of “reasonable accommodation.” Exactly what kinds of accommodation are required? And perhaps even a tougher question to answer: What exactly is meant by “reasonable”?

The high court dealt with the concept of reasonable accommodation in the Barnett decision. In this case, an employee with a disability initially transferred to a less physically demanding mailroom position. But he lost that job to a more senior employee who successfully bid on it under their employer’s seniority system.

The answer: An employer’s showing that a requested accommodation conflicts with its rules relating to seniority is normally enough to show that the accommodation is not reasonable – and thus not required under the ADA.

It will ordinarily be unreasonable, the court said, for the duty to accommodate to trump an established seniority system. It would be up to the employee to show that special circumstances make it proper for the seniority system to yield, the court added.

This case established an important limitation on the duty of employers to provide reasonable accommodations under the ADA.

The ADA permits an employer to require that an applicant or employee not pose a direct health or safety threat. The statutory language says the threat must be to others, whereas an implementing regulation expanded the concept to say that an individual can be excluded even if he presents a threat only to himself.

In Echazabal, the employer declined to hire an applicant because he had a liver condition that would be exacerbated by exposure to toxins at its refinery. The applicant sued under the ADA, saying that the regulation went too far.

The Supreme Court ruled for the employer. It said that the regulation was reasonable and was entitled to deference.

The gist of the ruling: An individual who cannot perform a job safely is essentially unqualified to perform it at all.

While the ruling makes it clear that employers can ensure a safe workplace, employers must remember that decisions relating to whether a particular applicant or employee poses a direct threat must be made with extreme care and due deliberation. These decisions must be made based on objective, factual evidence. In addition, employers must consider whether the threat may be eliminated or reduced to an acceptable level via the provision of reasonable accommodation.