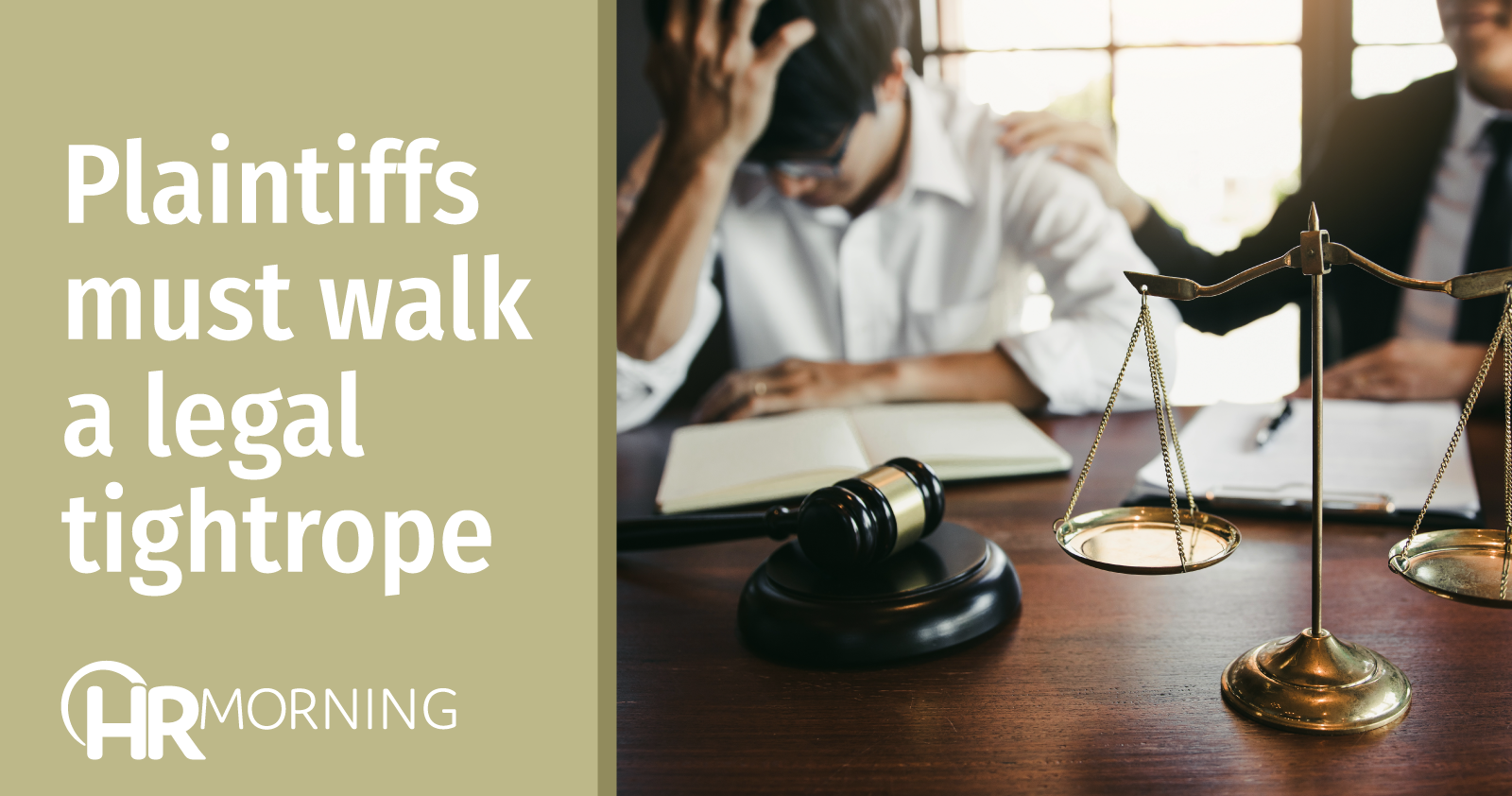 Plaintiffs asserting a violation of the Americans with Disabilities Act (ADA) must walk a fine line.

On the one hand, they must show that they have a “disability” within the meaning of the statute. That means they generally must prove the existence of a physical or mental impairment that substantially limits at least one major life activity.

In many cases, employers have successfully defended ADA claims by convincing the court that the plaintiff’s ailment or condition is not serious enough to qualify as a “disability” under the law. It’s a particularly convenient argument for employers; when it succeeds, the question of whether prohibited discrimination took place is never reached.

So on the one hand, plaintiffs must be careful to plead the existence of an ailment or condition that is serious enough to qualify as a disability.

But in doing so, there is a dangerous pitfall for plaintiffs to avoid: pleading the existence of an ailment or condition that is so serious that it renders them unqualified.

That scenario has been far less common. But it still happens, as it did in a recent case from the U.S. Court of Appeals for the Fourth Circuit.

Jeffrey Jessup became a regional sales manager for a subsidiary of the Barnes Group in 2000. He later became a business development manager for another Barnes subsidiary. Jessup said he experienced significant stress in that role.

In 2016, Jessup experienced a panic attack. Afterward, he asked for a leave of absence through the middle of January 2017. Barnes approved the request. It also approved Jessup’s subsequent request for an extension through mid-June of 2017.

During his period of leave, Jessup took several steps in an attempt to improve his mental state.

He underwent months of therapy, and he obtained prescription medication for depression and anxiety. In addition, he started meditating and developed relationships and activities outside of work.

In March of 2017, Jessup told his healthcare provider that he was feeling better than he had in years. He returned to work in April of 2017.

Position Goes Away — Or Does It?

Less than two weeks later, his supervisor told him that the employer had eliminated his former position and that it would place him in a new one.

The new position was as a corporate account manager or a regional sales manager. Jessup did not like the change. Although his salary and benefits remained the same, he said the new post included a different incentive compensation program. He also said that he discovered an organizational chart that showed his old job as open, not eliminated.

Jessup essentially alleged that his employer set him up to fail in the new position. He said Barnes raised his sales quota by $2 million in the middle of the year, and he asserted that he did not know of anyone who had ever met such a task.

Jessup’s new supervisor scheduled a meeting with him for a date toward the end of July of 2017. Two days before the meeting, Jessup had another panic attack.

Barnes denied the request, saying it could not grant it “without causing significant burden to the business.”

It told him he had to return to work by August 24. It also instructed him to contact its human resources department if he believed a change to his work environment would help him perform his job.

Jessup responded by submitting a request for leave through October 18, 2018. He later said that was a typo and that he wanted leave only through January 18, 2018.

In the middle of November of 2017, Barnes’ attorney sent him a letter notifying him of employment termination. The attorney said in the letter that it was clear that Jessup could not perform his essential job functions, either with or without reasonable accommodation. Thus sprung the genesis for the later argument that Jessup was not a qualified individual with a disability under the ADA.

Jessup says the letter did not terminate his employment. To support that assertion, he noted that after the date of the letter he retained his company car, cell phone and laptop and continued to have IT access.

Near the start of January of 2018, a psychologist gave Barnes a return-to-work certification for Jessup. The certification said Jessup could return to work with no restrictions.

The letter said that Jessup had been on leave since mid-July.

Jessup sued Barnes, accusing it of violating the ADA by wrongfully terminating his employment, failing to accommodate his disability, and subjecting him to a hostile work environment. He said he relapsed because he was mistreated when he returned to work following his initial period of leave.

But he strayed far from the fine line he needed to walk – and made a misstep that grew to become a crushing mistake – when he specifically alleged in his complaint that he “has not been able to recover from this debilitating relapse into severe anxiety and major depression and is now fully and completely disabled[d] and unable to work.” (Emphasis added.)

At his deposition, Jessup said that allegation was true when the complaint was filed in August of 2018. And when he was asked when he became completely disabled and unable to work, he said the onset date was sometime in April.

Barnes sought summary judgment. A magistrate judge recommended that the motion be granted because Jessup could not show he was qualified to do his job.

Jessup responded by saying that he in fact returned to work for a week in January of 2018, listing some tasks he performed during that time.

The district court granted summary judgment to Barnes, agreeing that Jessup could not show he was qualified. He was bound by his allegation in the complaint and the deposition testimony indicating an inability to work, the court said.

On appeal, the Fourth Circuit affirmed that decision.

The appeals court noted that ADA plaintiffs bear the burden of showing that they are “qualified individuals,” which means they can perform the essential functions of the job they hold or seek, with or without reasonable accommodation.

The court said that Jessup could not escape the admissions in his complaint and deposition testimony that at the time of his termination, he was not able to perform the essential functions of his job.

Jessup admitted an inability to work and did not suggest any reasonable accommodation that would have enabled him to do so, the court said.

There was just one reasonable reading of Jessup’s admissions, the court decided: that he has not recovered from a relapse that left him unable to perform his job.

The court also ruled that the employer did not subject Jessup to conduct severe or pervasive enough to constitute a hostile job environment.

The appeals court affirmed the ruling below.