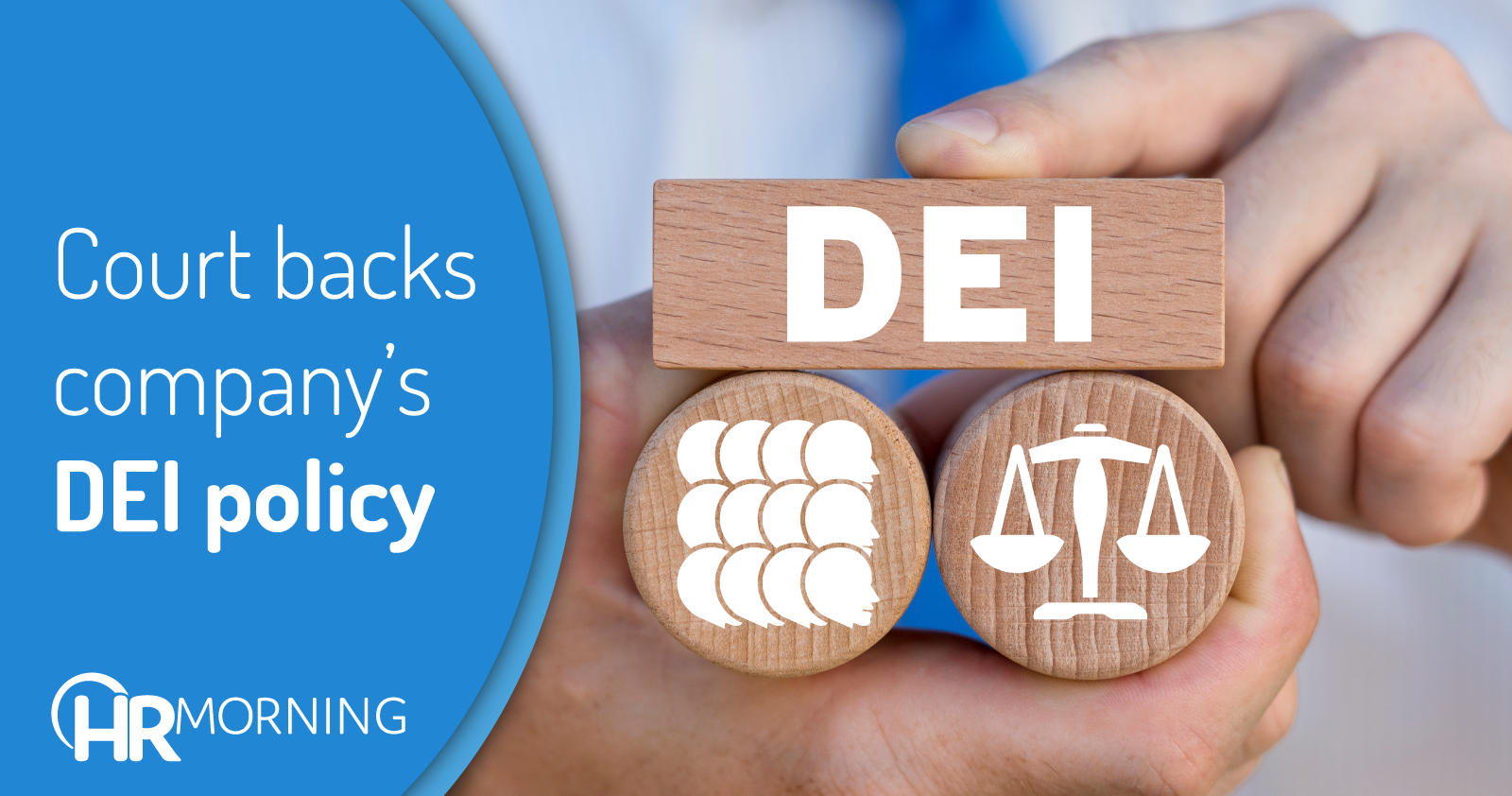 A state appeals court rejected a fired employee’s claim that a DEI policy proved a company engaged in sex discrimination.

As a member of his company’s HR department, John Weaver was responsible for training employees. In the spring of 2019, the company restructured the department to optimize its performance. As part of the reorganization, Weaver was assigned a new supervisor – a female colleague who had been his peer.

That December, the company notified Weaver that his position was being eliminated because the company had decided to “decentralize its training program.” Weaver, one other man, and six women were terminated effective January 2020.

Importantly, Weaver’s new supervisor was also notified in December that her position was being eliminated. However, she remained on the job to assist with the transition of the training program through March 2021.

Weaver filed a sex discrimination lawsuit, alleging that the company violated state law by firing him because he’s a man.

He argued that the “circumstances surrounding [the female supervisor’s] promotion, as well as his subsequent termination,” showed the company discriminated against him on the basis of his gender. Specifically, he asserted that:

He also pointed to the company’s diversity, equity, and inclusion (DEI) policy, alleging it proved the company “engaged in sex discrimination by emphasizing the need to increase the number of women and minorities in leadership roles.” He said the company tracked its progress on DEI goals by measuring “Headcount” – which he claimed was essentially a quota.

Moreover, he alleged that after his termination, the female supervisor “assumed his prior position” so the company had basically “hired an unqualified and inexperienced female” for his former job. He said the company’s proffered reasons – the woman’s “allegedly superior qualifications” and its reduction-in-force (RIF) to justify his termination – were a pretext for sex discrimination.

The company filed a motion for summary judgment.

First, it pointed out that the majority of the employees who were let go during the RIF were women.

Next, it stressed that its decision to lay off employees “had nothing to do with” its DEI policy initiatives. The company insisted that the DEI policy merely demonstrates that the company “is committed to considering a more diverse pool of candidates for available positions.”

The court granted the company’s motion for summary judgment, and Weaver appealed.

Elements of a ‘reverse discrimination’ claim

First things first: To state a prima facie case of discrimination, plaintiffs must generally show: “1) membership in a protected class; 2) qualification for the position; 3) an adverse employment action; and 4) replacement by a non-protected person.”

However, in cases where a plaintiff – like Weaver in this case – is a member of a historically protected group, one element needed to state a valid “reverse discrimination” claim is a bit different: Rather than showing he belongs to a protected class, Weaver had to allege “background circumstances [to] support the suspicion that the defendant is that unusual employer who discriminates against the majority,” the court explained.

Weaver reiterated his allegation that the company promoted the female supervisor to shield her from the then-upcoming layoff. He also restated his belief that he was more qualified than the woman who was promoted. He further asserted that the DEI policy showed that the company discriminated against him on the basis of his sex.

The company argued that its “termination of six females at the same time it terminated Mr. Weaver and one other male shows that its decision was not based upon Mr. Weaver’s sex.” It also pointed to the HR director’s testimony, which stated that he believed the woman “was higher performing than Mr. Weaver, had more experience, and had better relationships with [company] business partners, making her better suited for the role.”

Regarding the woman’s promotion, the appeals court held that “Weaver did not present any evidence” that suggested the decision was “anything other than a legitimate, non-discriminatory business decision.” Instead, his arguments “amounted to mere conjecture,” the court explained.

And what about that DEI policy? Was that enough to prove illegal sex discrimination?

No. The court OK’d the DEI policy and its goal of “increasing the number of women and minorities” in leadership roles, finding the document did not “alter” the court’s conclusion that the company stated legitimate business reasons for its decisions.

As such, the court affirmed the ruling in the company’s favor.