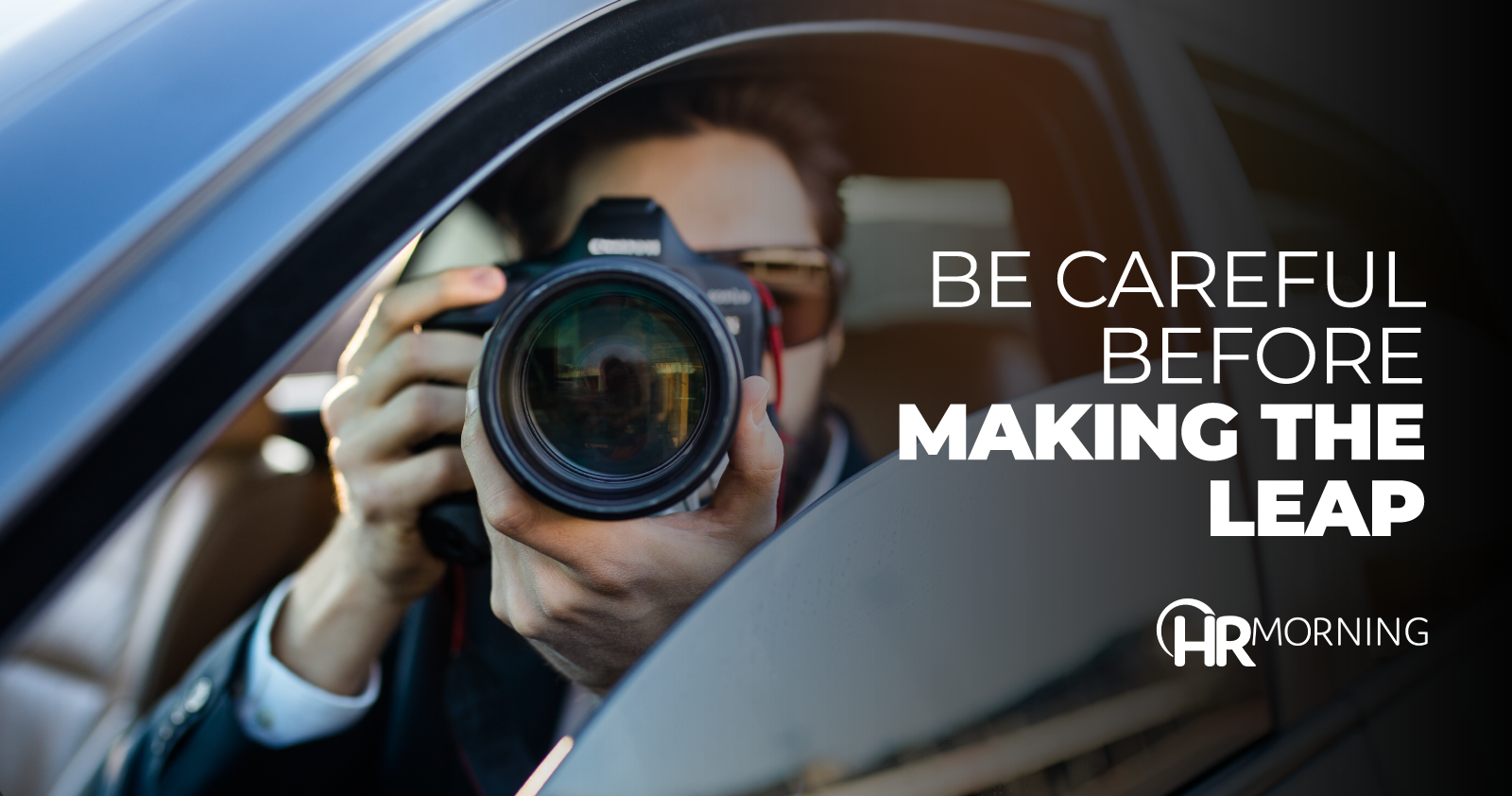 Employers have a legitimate interest in preventing FMLA abuse. But of the tools at their disposal to fight that fight, is conducting surveillance on employees one they should use?

The short answer: Surveillance is perfectly fine as long as there is good reason for it – and it’s not used to retaliate or interfere with an employee’s use of leave.

So what exactly is “good reason” — and when can conducting surveillance on employees lead to problems for employers?

For the answers, read on.

First things first: The FMLA recognizes that employers have a legitimate interest in ensuring that FMLA leave is taken for a legitimate qualifying reason. To this end, employers may require that an employee’s need for leave for a serious health condition be supported by a certification that is issued by the employee’s healthcare provider.

That initial certification must be both complete and sufficient. It is incomplete if an entry on an applicable form was left blank, and it is insufficient if it provides information that is “vague, unclear, or non-responsive,” the Department of Labor has advised.

In addition, an employer that has a legitimate reason to doubt the validity of an initial medical certification may require a second or third medical opinion, at the employer’s expense.

What if an employer still has doubts about the legitimacy of an employee’s need for leave even after receiving one or more certifications from the employee?

In these cases, it may be time to consider using surveillance to make sure there is no FMLA abuse. But there are important caveats to be aware of.

One thing is clear: Multiple court rulings have upheld the general right of employers to institute surveillance in cases of potential FMLA abuse.

In addition to the co-worker’s report, there was other evidence to suggest that the employee might be abusing FMLA leave. For example, she often used FMLA leave near the weekend or together with other forms of leave. Also, the employer noticed that the employee’s FMLA leave was on pace to exceed her yearly allotment.

The court ruled for the employer, pointing out that nothing in the FMLA bars employers from taking steps to ensure that employees do not engage in FMLA abuse. Here, it stressed, the employer had a reasonable basis to suspect that the employee was abusing FMLA leave and was thus justified in initiating surveillance.

A similar case is Snyder v. Dow DuPont, No. 21-1235, 2022 WL 1467439 (3d Cir. 5/10/22). There, an employee “had a pattern of high absences that seemed to coincide with the maximum amount of [FMLA] leave time.” In addition, several co-workers told the employer that she was doing things, like boating, that were inconsistent with her claimed need for leave.

The employer suspected that the employee was abusing her leave, and it hired a private investigator to surveil her. After taking leave for supposedly not being able to put any weight on her foot after surgery, she was observed walking, driving, getting a pedicure, and riding a lawn mower.

When the employer fired her, she filed a claim for FMLA retaliation.

She lost. The employer reasonably suspected that she was abusing her leave and legitimately used the surveillance tool to confirm its suspicions, the court said. She did not show that the employer’s reasons for either the surveillance or the termination were pretextual, it found.

Despite the assurance that these cases provide for employers, they should not be read as a green light to pull the trigger on surveillance without good reason. Instead, it is crucially important to have solid objective evidence justifying the need for it. It is also a good practice to first ask for recertification before taking the more drastic step of instituting surveillance.

Employers who jump to surveillance without a solid objective basis run the risk of being accused of using surveillance as retaliation for a request for FMLA leave or a means of chilling an employee’s legitimate right to take it.

In Walker v. City of Pocatello, No. 4:15-cv-00498-BLW, 2018 WL 650417 (D. Idaho 1/31/18) (rev’d on other grounds at 764 Fed. Appx. 646 (9th Cir. 2019)), for example, a police department instituted surveillance on an officer it suspected of abusing FMLA leave. Instead of asking him for recertification, the employer jumped quickly to beginning surveillance. The employee was denied a promotion after he took FMLA leave, and he sued to allege FMLA claims of interference and retaliation.

The court said a fact issue existed on the question of whether the department’s “invasive” surveillance wrongfully chilled his use of FMLA leave. “[W]here an employee is subjected to negative consequences … simply because he has used FMLA leave, the employer has interfered with the employee’s FMLA rights,” the court explained. Preserving the officer’s FMLA claims, the court observed that the use of surveillance was an “extraordinary response” to concerns about FMLA abuse.

Surveillance can be a useful and appropriate tool in cases involving potential FMLA leave abuse. But before taking that step, employers should first seek recertification and make sure they have an objectively justifiable basis for conducting surveillance. As the cases show, reliable reports from co-workers and suspicious timing of leave can help form this objective basis. An employee’s provision of inconsistent reasons for the leave is another legitimate indicator that leave is being abused.

One final note: As a best practice, employers should put employees on notice via their FMLA policy that surveillance may be used in cases involving alleged leave abuse.