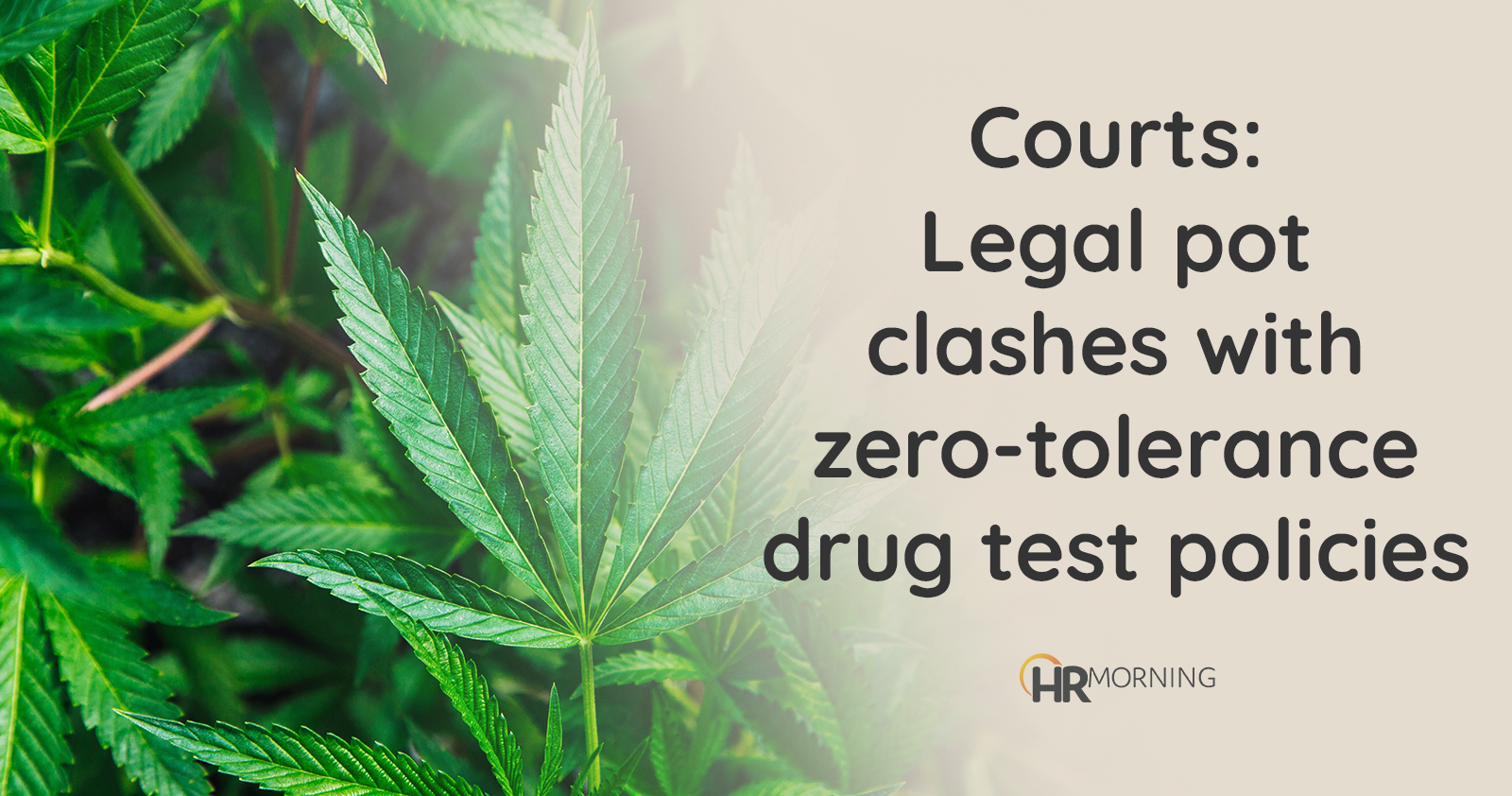 Courts have historically found marijuana-positive drug tests sufficient grounds to terminate an employee or refuse to hire someone. Employers were safe to move forward without worrying about whether the individual was approved to use medical marijuana or if an employee was actually impaired while at work.

Now, however, many states and local jurisdictions are enacting or considering anti-discrimination laws that prohibit employers taking adverse action against employees for failing a drug test, even if the employer has a zero-tolerance policy in place.

In a number of states, medical marijuana statutes protect employees whose pot use is legal, does not take place at work, and doesn’t impair their ability to do their job safely and effectively.

And more courts are following that trend when ruling on employee-drug-test-driven employment actions. That is having a real impact on employers’ drug testing policies.

Despite remaining illegal under federal law, marijuana is legal for medical and/or recreational use in 33 states and the District of Columbia.

And the changing legal landscape is reflected in employee drug test results.

Testing lab Quest Diagnostics reported in April 2019 that marijuana is the most frequently-detected drug in workplace-mandated urine screenings.

With 4.4% of screened employees testing positive for marijuana in 2018, the company says, positive results are up by more than 25% since 2012.

Was the worker impaired?

One reason that employers have taken a hard “use it and lose it” line with even approved medical marijuana use is the difficulty of determining when workers last consumed the drug.

Cannabis metabolites can be detected in urine even 30 days after someone ingests the drug. And that makes it effectively impossible to determine if a positive test proves a worker was high on the job.

Before legalization, that didn’t matter. If a test showed a worker had consumed an illegal substance, zero-tolerance policies mandated they were let go.

And workers typically couldn’t access unemployment benefits after they were fired.

For a long time, judges agreed. Even after medical marijuana legalization in California and Colorado, courts in those states ruled that employers could terminate employees who tested positive for the drug.

And that was even if they were using the drug outside of work to treat approved medical conditions and were not impaired while working.

In Colorado, where the legal marijuana business contributes more than a billion dollars a year to the state’s coffers, the state Supreme Court in 2015 ruled unanimously that Colorado’s medical marijuana laws did not preempt an employer’s zero-tolerance policy.

Now, however, even in states where courts have sided with employers in the past, organizations are more and more cautious about making hiring and firing decisions based on drug test results.

And, given recent trends, they are wise to take a fresh look at their policies.

Courts in Arizona, Connecticut, Delaware and New Jersey – all states with medical marijuana laws in place – found for employees who claimed they were fired or had job offers rescinded based on a positive drug test.

Those courts have taken various approaches in finding for employees and applicants.

In Arizona, the court found that the employment decisions in question violated anti-discrimination provisions in state medical marijuana statutes.

In Delaware, a court rejected an argument that federal law preempted the state’s medical marijuana rules and allowed an employee to fire a worker who tested positive after an on-the-job accident.

And local municipalities are also getting involved. New York City has banned marijuana testing of job applicants. And, starting in 2020, Nevada employers can’t refuse to hire someone based on a positive test.

Are your policies in tune with the times?

For employers, the message is increasingly clear – this is a good time to revisit your drug testing policies.

Of course, using or even possessing pot while on the clock is grounds for terminating anyone, even a medical user.

But, given the limits of available drug tests, and the exploding number of people with medical marijuana permits, basing any employment action on a positive test alone could result in a lawsuit and, probably, an expensive settlement.