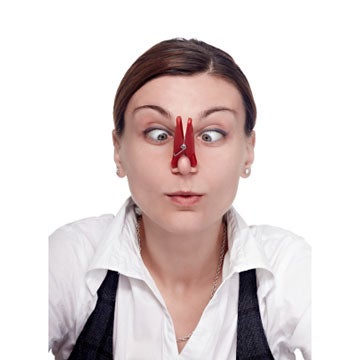 If someone in your office has a bad odor, there are some tactful ways to deal with it. Bringing in air fresheners and telling everyone else in the office to do the same? Not so much.

Amber Bridges, a team leader, was fired because of how she chose to deal with a smelly co-worker. Instead of talking to the co-worker or getting a manager to intervene, Bridges got almost everyone in the office to bring in air fresheners.

The employee in question went to HR and complained of a hostile work environment. Managers agreed that she was being discriminated against due to her smell, and they fired Bridges.

In an even weirder turn of events, Bridges decided to file a lawsuit claiming that her termination was the result of her association with a “disabled” co-worker, therefore she should’ve been protected under the ADA as well.

If you’re scratching your head over this lawsuit, you’re not the only one. Evil HR Lady Suzanne Lucas is confident this case will get tossed immediately, since Bridges’ discriminatory actions against the employee were the reason for her termination.

But it begs the question: What’s the right way to handle a smelly employee?

Lucas says this whole mess could’ve been avoided if someone had simply talked to the employee. A manager has every right to ask their workers to come to the office showered and in clean clothes. If bathing isn’t the issue, the next step would be getting the employee to see a doctor and fill out ADA paperwork — chronic body odor is covered, as long as the proper steps are taken.

Once an employee’s body odor is covered under the ADA, the interactive process needs to take place to find an accommodation that works for everyone. The best solution very well could be putting air fresheners around the office, but that can only happen after a conversation with the employee takes place. There could be several other possible solutions, such as giving the employee their own office.

Bottom line: A lot of unusual things can be covered under the ADA, so exploring this route first is never a bad idea.