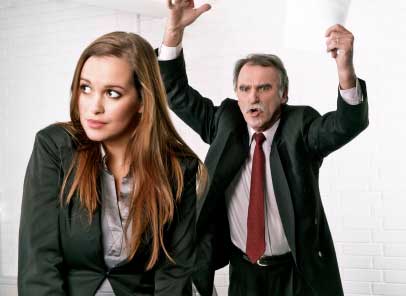 Retaliation is the most common employment discrimination claim for the third year running – and that’s no surprise, what with the way these three firms acted.

Won’t somebody please think of the children?

Marla Pietrowski was a senior case manager for Philadelphia’s The Kintock Group. The company helps ex-convicts who’ve been released from prison transition back into society.

Pietrowski grew concerned when a manager at her firm brought his child into the workplace — a real issue considering that some of the ex-convicts were child predators. She also believed that the manager was abusing drugs.

So Pietrowski brought her concerns to her superiors — and was fired.
She sued, claiming that she was retaliated against for blowing the whistle on her boss.

Retaliation for being old?

David Nelson, 55, had been gainfully employed for more than 25 years at RadioShack’s regional office in Denver. He also had a spotless performance record.

But that all changed when a new 43-year-old supervisor was assigned to oversee his work. Within four months, Nelson had been placed on two performance improvement plans.

Nelson, concerned that his manager was discriminating against him because of his age, complained to HR. Five days later, he was terminated. Nelson went to the Equal Employment Opportunity Commission (EEOC), which sued Radioshack on his behalf. A jury ruled in his favor, and Nelson was awarded $674,938 – $187,706 in liquidated damages, $199,470 in front pay damages, $187,706 in back pay and $101,657 to offset the increased tax burden of receiving the entire judgment in one lump sum.

Fired for complaining to EEOC

According to the EEOC, a non-Rastafarian security officer for the firm allegedly threatened to shoot a group of Rastafarian officers.

The Rastafarian workers complained — but a white supervisor made fun of their concerns and insinuated the incident was the Rastafarian staffers’ fault.

One of the officers, who also claimed that the supervisor had used the N-word before, contacted the EEOC about the incident. He was fired.
The EEOC then sued Grand Central on behalf of the officer, and the company settled. In addition to a $135,000 settlement, the company agreed to conduct extensive training on investigating discrimination complaints, including methods for proper documentation and unbiased assessment of witness credibility.