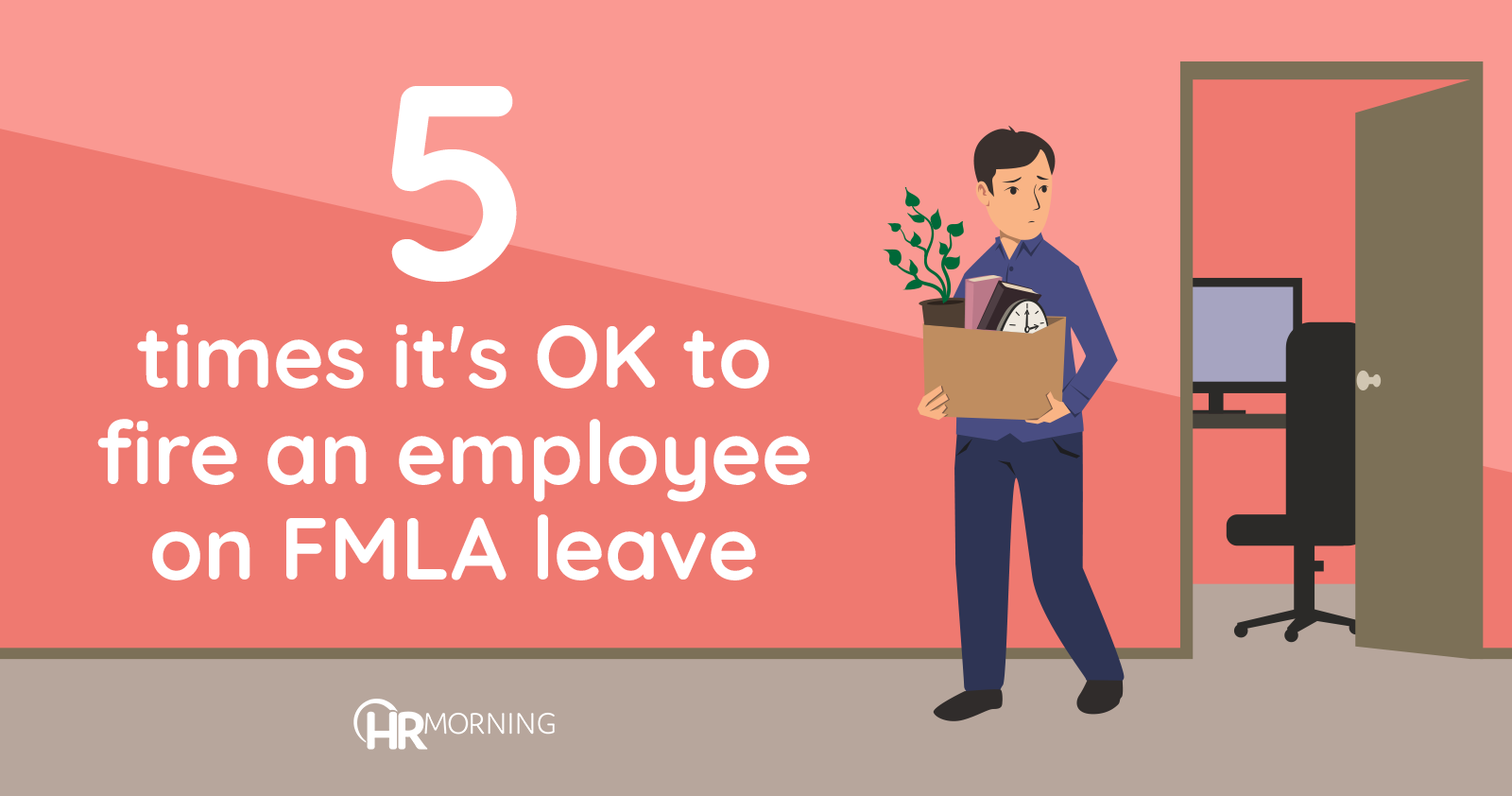 Of course, you’d never fire someone for taking FMLA leave. But perhaps the termination had been in the works long before the person took FMLA leave. It’s still a sticky situation, but a court recently outlined when it’s safe to say goodbye to someone on FMLA leave.

The danger is, obviously, FMLA interference and retaliation claims. You never want to make it look like the taking of FMLA leave was a motivating factor in the decision to terminate someone (not that it would be).

Still, an FMLA lawsuit may likely be forthcoming if you terminate someone while they’re on, or just returning from, FMLA leave. It’s kind of a go-to move for employee-side attorneys: “Oh, you were on FMLA leave when they fired you. That’s interference and retaliation.”

But courts will side with you if you can prove the employee, FMLA leave aside, had it coming — e.g., the person was embezzling money, harassing the secretary or lying to customers.

When it’s safe to cut the cord

The U.S. Court of Appeals for the Tenth Circuit recently highlighted five separate cases in which it threw out a worker’s FMLA lawsuit against an employer after finding “undisputed evidence that the employee in question would have been terminated even if FMLA leave had not been taken.”

It then pointed out the element each employer in those five cases had on its side that allowed the court to toss the claims against it. If you can prove one of these elements exist when weighing your decision to terminate an employee on FMLA leave, it’s generally safe to say “you’re fired”:

The court of appeals cited these while issuing its ruling in an FMLA interference and retaliation lawsuit brought against Tulsa Winch Inc. (TWI).

Fired after returning from leave

Paul Janczak was the general manager of Canadian operations for TWI when he took FMLA leave to recover from an auto accident.

Immediately upon his return from FMLA leave, Janczak was fired. He then filed an FMLA interference and retaliation suit.

The company tried to get his lawsuit thrown out claiming it was considering a reorganization of its management structure and eliminating Janczak’s general manager position prior to his taking leave.

As the court documents indicate, it does indeed appear as though the company had started evaluating whether or not to eliminate Janczak’s position prior to his leave.

As a result, the court said Janczak’s interference claim should proceed to trial, where TWI faces either a costly court battle or settlement.

The court said in order for it to dismiss Janczak’s interference claims before a trial, TWI had to show that his termination would’ve definitely occurred regardless of his leave.

Takeaway: Don’t evaluate whether or not someone should be eliminated while he or she’s on FMLA leave. That’s a decision that must be made prior to the person’s leave — or well after, to enable enough time to pass for the resulting termination not to appear linked to the person’s FMLA leave in any way.

The court noted that, typically, retaliation occurs after an employee has been restored to his or her position only to suffer an adverse employment action after that fact.

But in Janczak’s case, he was never restored to his prior position; therefore his claims fell under the interference theory.
Cite: Janczak v. Tulsa Winch Inc.