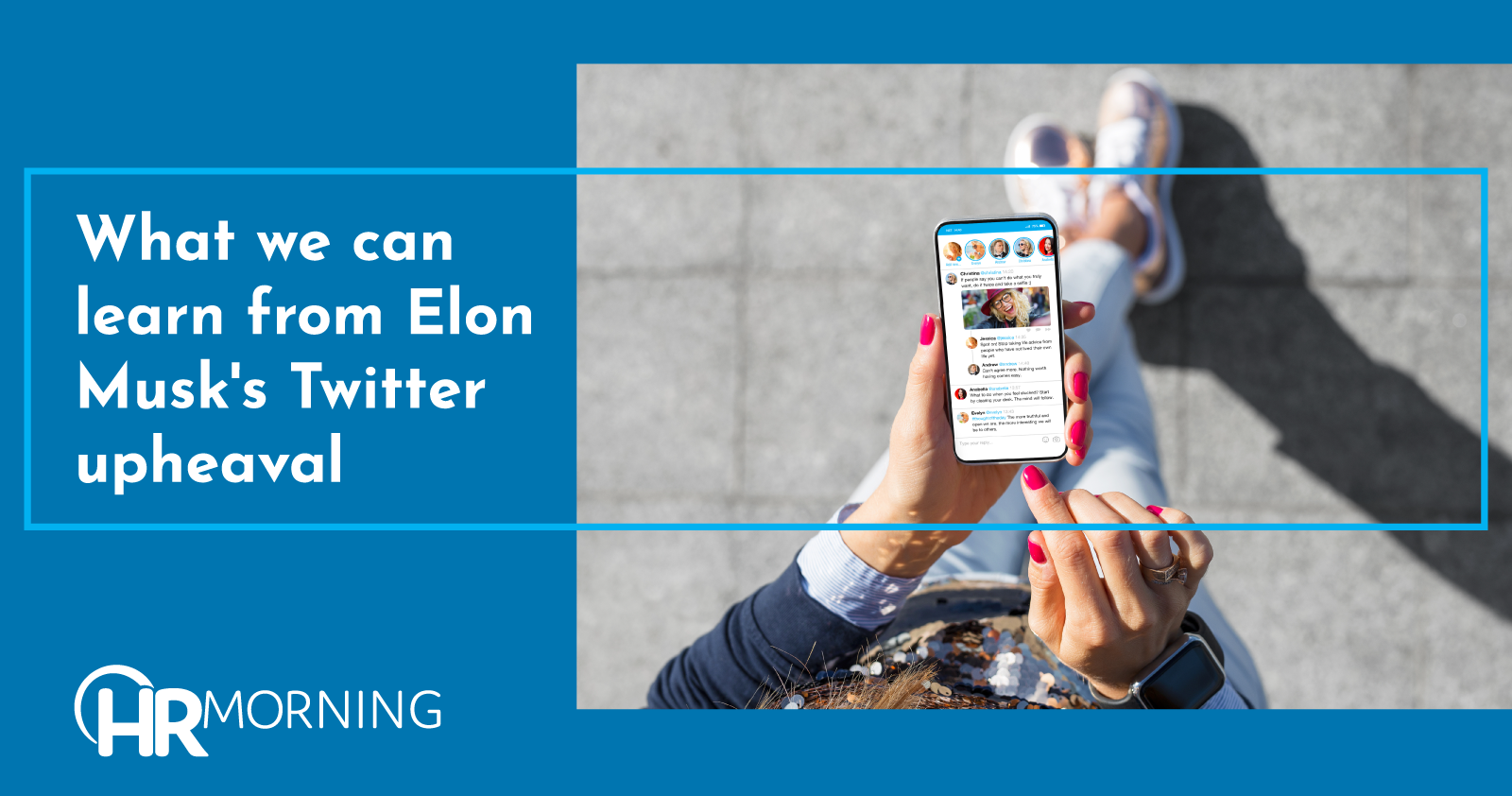 After an ongoing battle between Elon Musk and Twitter, the mogul has finally taken over ownership, bringing in a new and controversial Musk era of Twitter.

In addition to big changes to the platform itself – like charging users monthly to have a verified checkmark – Musk is transforming the workforce itself, starting with a 50% reduction in force (RIF).

As the world watches, Musk’s Twitter layoffs have some valuable lessons for HR on what not to do when navigating workforce changes.

Leaving employees in the dark

Rumors that mass Twitter layoffs were looming once Musk took over proved to be true. Between Thursday afternoon and Friday morning, 3,700 employees – nearly half of the workforce – were affected by the layoffs.

The announcement came through an email, telling employees they would be notified through their personal email if they were affected by the Twitter layoffs and their work email if they were still employed. For those who were laid off, the notice was swift and blunt. The email said in part, “Today is your last working day at the company,” according to Insider.

What went wrong: When navigating a layoff, communication is key. Employees who were affected by the Twitter layoffs were left in the dark and had access to their work accounts revoked immediately, leaving both affected and unaffected employees confused.

What HR can do better: Keep communication open and streamlined to prevent confusion and miscommunications. Although mass layoffs can be chaotic, it’s important to let employees know all the information they need in a timely manner and be compassionate in your messaging.

Unsurprisingly, Musk’s swift Twitter layoffs resulted in retaliation from employees. For example, a federal class-action lawsuit was filed the night before the layoffs were set to occur, citing violations of federal and state statutes related to layoff notices.

The Worker Adjustment and Retraining Notification (WARN) Act requires that employers give at least 60 calendar days’ notice for a mass layoff of more than 100 employees or plant layoffs.

After the pre-emptive lawsuit was filed, the lawyer who filed the suit reported that Musk was trying to comply with the WARN Act by giving employees pay and benefits through the new year.

What went wrong: Lawsuits are an HR nightmare. The first step to avoiding lawsuits is to know what is and isn’t allowed. However, it’s also essential to have all your ducks in a row before the layoffs begin to avoid confusion and the start of legal trouble.

What HR can do better: For the sake of the company and affected employees, it’s important to gather all information before conducting the layoff. It may be a good idea to talk to a legal advisor to understand what your legal limits are and how to best navigate the layoff notices to ensure you are complying with state and federal regulations.

According to reports, Musk is dissolving – at least for now – employee resource groups (ERG) like Blackbird, a business resource group for Black employees, and Twitter Women.

Musk is also burning bridges with the employees who were spared during the Twitter layoffs. They’ve expressed frustration over the way it was handled and the changes Musk is making.

Additionally, Musk is ordering all employees to return to the office, according to a report from Axios, which would end Twitter’s permanent work-from-home policy.

What went wrong: With limited communication and the dismantling of core parts of the company’s culture, remaining employees may feel uneasy about the future of Twitter. Employees who are left after a layoff may also be less productive and less likely to recommend the organization as a great place to work, according to a LeadershipIQ study. Plus, breaking down resource groups and employee-first policies may just fuel dissatisfaction for those who are left.

What HR can do better: Layoffs don’t only impact those who are being laid off – the way you navigate the situation before, during and after can have an impact on your remaining workforce. It’s important to handle the situation compassionately so they feel valued and motivated to continue doing great work.