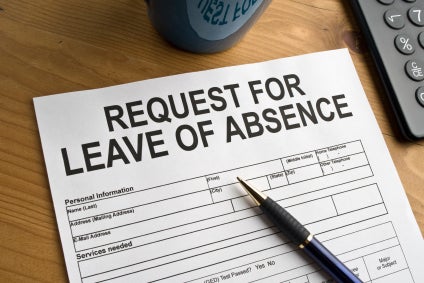 An employer can violate the FMLA simply by discouraging an employee from taking FMLA leave, a federal appeals court ruled. Importantly, this means employees can prove an FMLA violation without showing that a request for leave under the statute was actually denied.

The ruling demonstrates the breadth of protection afforded to employees under the FMLA’s so-called “interference clause,” which bans employers from, among other things, interfering with an employee’s exercise of rights granted by the statute.

The conclusion squares entirely with both the language of the statute and its implementing regulations, and employers must be aware that under that language an actual denial of leave is not required to trigger an FMLA violation.

Salvatore Ziccarelli began working as a corrections officer for the Cook County (IL) Sheriff’s Office in 1989.

He developed several serious health conditions during his tenure there, and as a result he used leave available to him under the FMLA. Between 2007 and 2016, he used between 10 and 169 hours annually.

In 2016, he sought treatment for PTSD, and by September of that year he had used 304 of his allowable 480 hours of FMLA leave for the year.

On the advice of his doctor, Ziccarelli decided to enroll in an eight-week treatment program to treat his PTSD. He talked to the sheriff’s office’s FMLA manager about using a combination of FMLA and other leave to attend the program.

In any event, Ziccarelli never submitted a request for more FMLA leave. Instead, he resigned soon after the conversation took place. He then sued the county and others, alleging unlawful interference with his FMLA rights and retaliation.

The U.S. Court of Appeals for the Seventh Circuit reversed the lower court’s decision with respect to the FMLA claim of interference. It explained that to win on an FMLA claim of unlawful interference, employees have to show they are eligible for FMLA protections, are covered by the statute, are entitled to leave under it, and provided sufficient notice of an intent to take it.

Here, the appeals court clarified the precise contours of the fifth element. It said a proving a violation of the FMLA’s interference clause does not require employees to show they were actually denied FMLA benefits.

The statute plainly says employers cannot interfere with the exercise of FMLA rights, the appeals court noted, and the clause protects “the attempt to exercise” FMLA rights.

In addition, the court said, Department of Labor regulations that implement the statute plainly say that the clause bars employers from discouraging the use of FMLA leave.

The denial of FMLA benefits is not required to show an FMLA interference violation, the appeals court held. Threatening an employee with discipline for seeking or using FMLA leave clearly is interference with FMLA rights, it said.

Here, Ziccarelli presented a factual issue as to whether the county violated the FMLA when the manager allegedly discouraged him from taking FMLA leave. As a result, his FMLA interference claim had to go forward.

The appeals court upheld the lower court’s disposition of the retaliation claim, which asserted that the county constructively discharged Ziccarelli because he tried to exercise his FMLA rights. But to say he would have been fired if he had exercised his right to take leave would require the court to engage in speculation, it said. After all, he never asked for more leave and may have been able to combine annual leave and sick leave with FMLA leave to take the time off he needed and avoid termination.

The case was remanded.