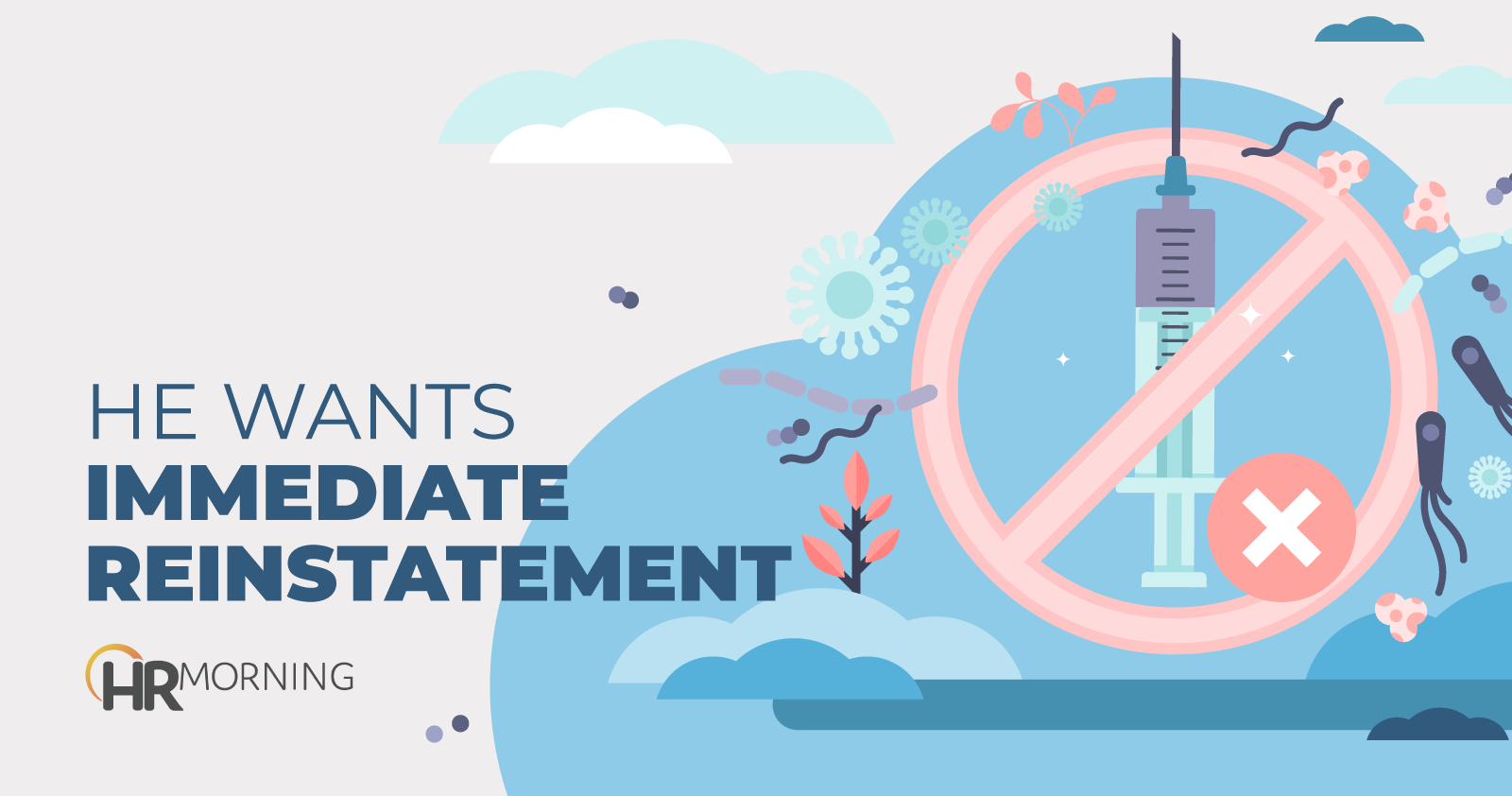 A doctor who lost his job after he refused to comply with his employer’s vaccine mandate was unable to persuade a federal appeals court to order his reinstatement.

The hospital made medical and religious exemptions to the vaccine requirement available. Those who did not qualify had to be vaccinated by mid-November of 2021. When reviewing requests for exemptions, the hospital looked at the position held by the employee as well as the amount of contact they had with others, the current risk posed by COVID-19 and the availability of other safety measures.

He seeks exemption to vaccine mandate

Halczenko sought a religious exemption from the vaccine mandate. The hospital denied his request, saying that granting it would impose too heavy of a burden on it in light of his position.

Halczenko responded to the hospital’s denial of his exemption request by filing an Equal Employment Opportunity Commission administrative charge of unlawful religious discrimination. The hospital suspended him without pay in November, and it terminated his employment in January of 2022.

He says he has tried to find similar work at other hospitals, with no luck. He attributes the lack of success to a non-compete agreement he signed with St. Vincent, his preference not to move, and limited demand for doctors in his area of specialization who refuse to comply with a vaccine mandate.

In November of 2021, Halczenko joined four other St. Vincent employees in a lawsuit that accused the hospital of violating Title VII by denying their requests for a religious exemption to the vaccine requirement. The court’s decision in the case says that after the lawsuit was filed, the hospital “afforded the other named plaintiffs – a nurse practitioner and three nurses, including two on the pediatric ICU – religious accommodations.” That left only Halczenko as a plaintiff denied relief, and he asked the court to issue a preliminary injunction that would require the hospital to reinstate him.

The trial court denied Halczenko’s request. It said he did not show irreparable harm or that there was no adequate remedy at law for him.

It added that a permanent loss of employment, by itself, is not irreparable harm. It also pointed out that Halczenko might be able to gain reinstatement or back pay at some later point in the litigation.

Halczenko’s argued that he would suffer irreparable harm if the injunction was not granted because his skills would dull very rapidly if he remained out of work.  The district court rejected his argument that his rapid reinstatement was thus required. It concluded that his alleged harm was only speculative. Halczenko then proceeded to file an appeal with the Seventh Circuit Court of Appeals.

The appeals court explained that to get his requested injunctive relief, Halczenko had to show he was likely to succeed on the merits; that he is likely to suffer irreparable harm if his request is denied; that the balance of equities tips in his favor; and that the injunction would serve the public interest.

It also noted that while Title VII bans religious discrimination, it does not require employers to grant accommodations that would pose an undue hardship. It further noted that plaintiffs who ultimately succeed on Title VII claims have a broad range of remedies available to them, including compensatory and punitive damages.

The appeals court agreed with the district court that none of the harms Halczenko alleged were irreparable. He did not show that granting the requested injunction was the only way for him to avoid having his work skills deteriorate, and the fact that he was having a hard time finding another job did not prove irreparable harm. Nor would it be appropriate to presume irreparable harm, the court said.

Halczenko did not show an irreparable harm or that the legal remedies available to him under Title VII would not be adequate. As a result, he was not entitled to the preliminary injunction he sought.

Still some explaining to do on vaccine mandate rule

The court took care to note that the hospital’s decision to grant others a religious exemption while denying one to Halczenko “raises questions about the reasons for the differential treatment.” But that question was best suited for further explanation in additional proceedings.

This decision only upholds the denial of preliminary relief; it does not mean the hospital will ultimately prevail. In fact, it is faced with the task of explaining why it denied Halczenko his requested exemption while granting it to others who held similar positions.