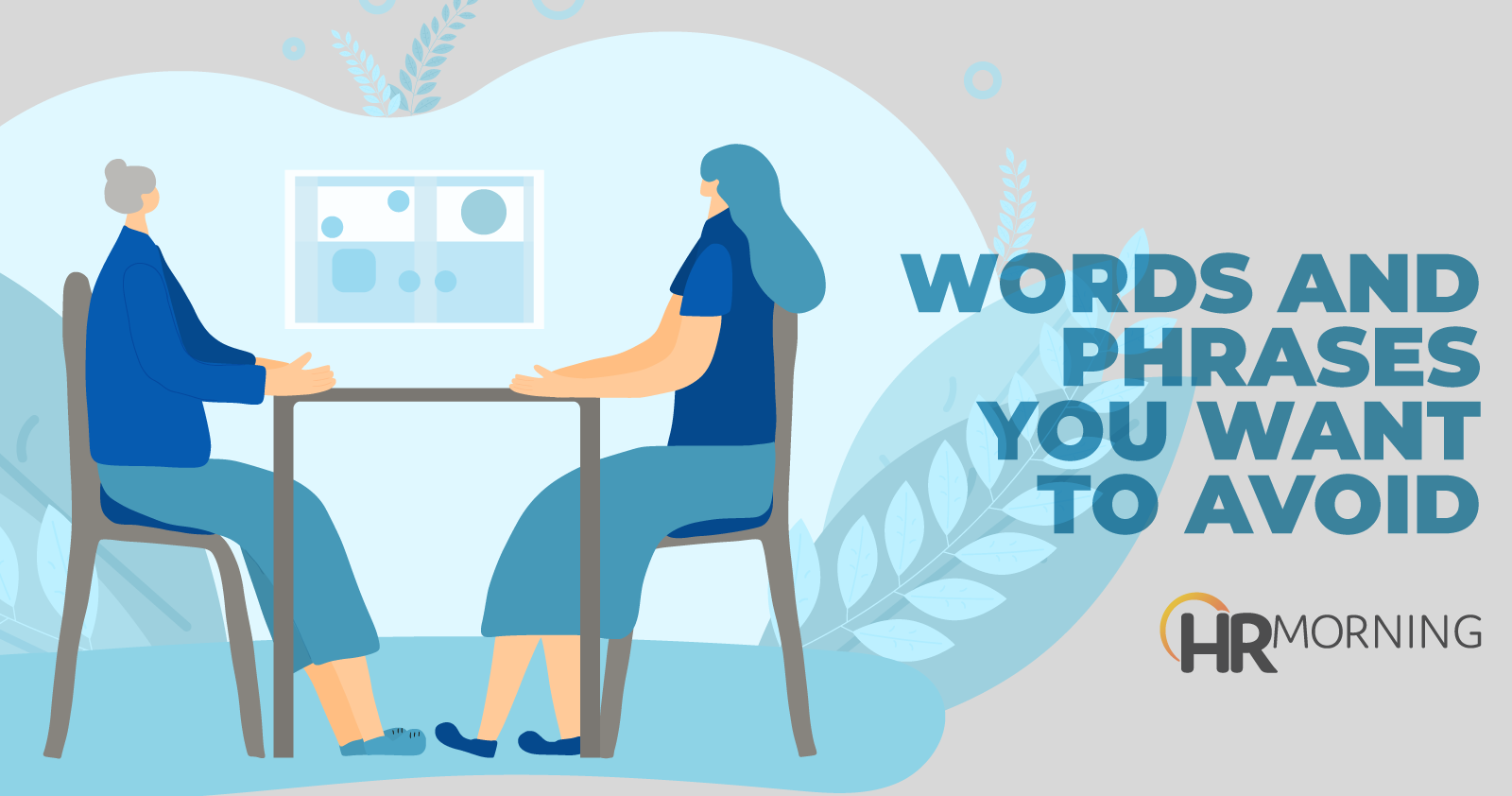 No one likes to have difficult conversations – and the last thing you want to do is make it worse.

HR professionals probably face more difficult conversations than anyone in a workplace. Then you get to top that with having to help front-line managers navigate their tough talks. What a challenge!

But one way to make tough talks less difficult is to avoid certain words and phrases that tend to agitate the situation.

“Difficult conversations are difficult for a reason, and when you’re anxious or stressed out, it’s easy to say the wrong thing,” says Jim Detert, author of Choosing Courage, in the Harvard Business Review. “And it doesn’t matter how prepared you are. Your best laid plans will go to waste if you offend or anger the other person.”

Oftentimes, the words we choose make the message more crass than intended.

The cure: “When navigating a difficult conversation, you need to craft your message while keeping the other person’s feelings and opinions in mind,” Detert says.

Here are some key words and phrases to avoid during a difficult conversation – and better ways to get the point across.

What to avoid: “Clearly,” “Obviously,” “Beyond a doubt”

Reason: They’re absolutes, suggesting you have an objective reality that others – especially those on the other end of the difficult conversation – will easily see, too. Truth is, they aren’t likely to agree with what is so obvious and 100% true to you. Other people might even think you consider their views are stupid or inconsequential.

Reason: Exaggerations undermine your credibility. When you accuse others in difficult conversations of “always” committing an infraction or “never” doing something as expected, they can easily say, “That’s not true.” And they’re probably right, leading to debate on how often something happens or doesn’t.

What to say instead: “According to our records, you were late 11 times this month.” “The customer said you didn’t return four of his calls.”

Reason: Adults tend to turn against “shoulding” statements because they feel judged. They’d rather decide on what to do than be told exactly what to do. They feel belittled.

What to avoid: “You make me so angry/frustrated/confused …”

Reason: People don’t react well to being blamed for how others feel or react. They get defensive because they didn’t intend to make others feel badly.

What to say instead: “When you do X, it makes me feel Y. Could you please not do that going forward?”

What to avoid: “You’re wrong/unprofessional/forgetful … ”

Reason: Not surprisingly, other people will take offense to any negative words that refer to their character.

What to say instead: X behavior … “detracts from our mission” or “isn’t aligned with our goals.”

What to avoid: “It’s not personal”

Reason: It is personal to others. You can’t change how they feel.

What to say instead: “This is difficult, and I want to make it as comfortable as possible for both of us.”