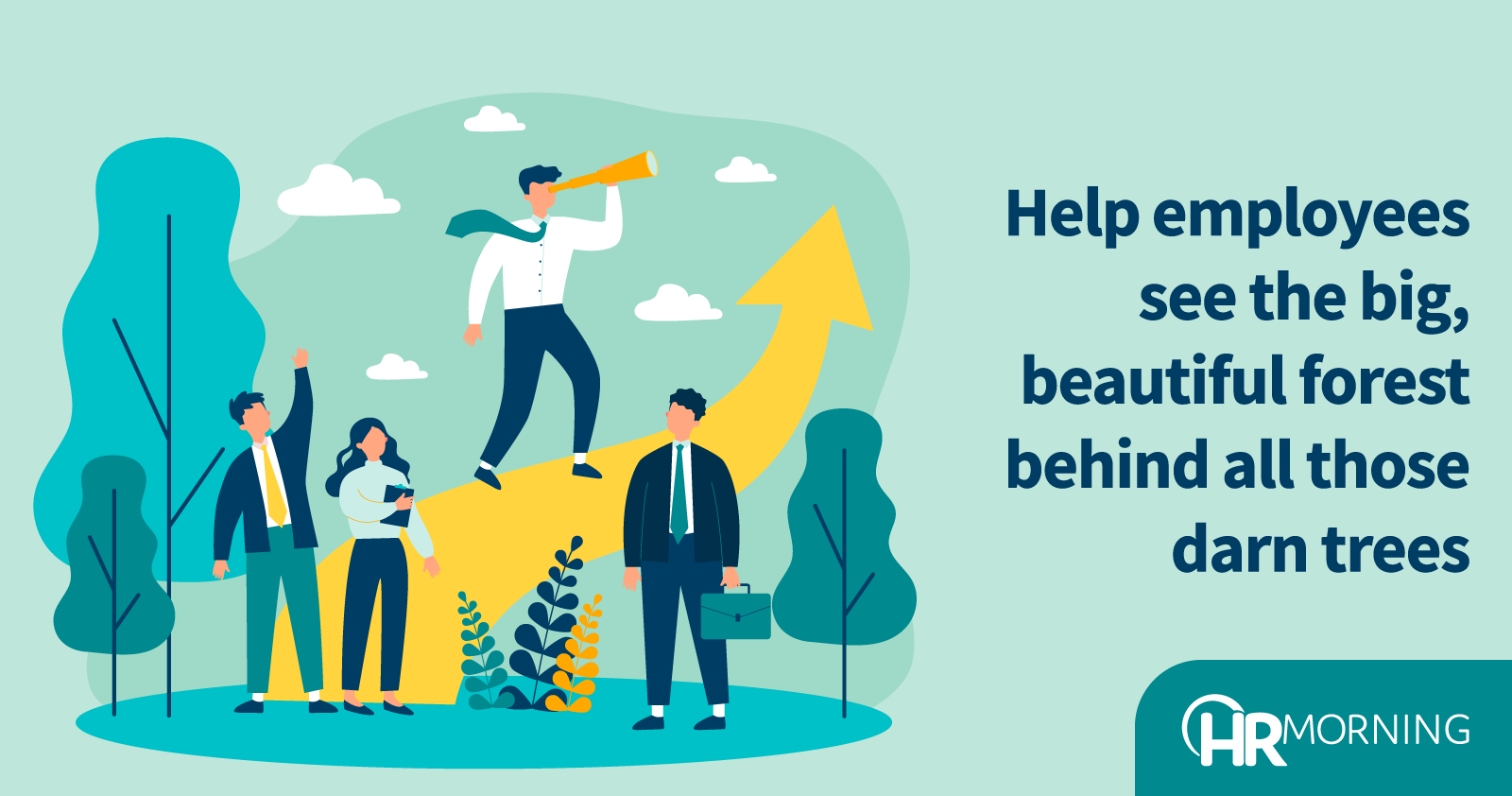 Good leaders are expected to know their organization values. That’s the easy part.

The harder part is getting your employees to carry the torch and express those values every day — so your customers get the message, and your business reaps the benefits.

You can preach to your employees what your organizations values are until you’re blue in the face. But that won’t get them to “live” it.

Instead, here are seven key steps on the path to help nurture each employee’s natural ability to think through problems, come up with solutions, and generally see the big, beautiful forest behind all those darn trees.

Curious employees are engaged employees, and they are the key to bringing values to life. Don’t be the manager who undercuts his or her own efforts by stifling that curiosity.

It happens all too often, and often inadvertently.

We get caught up in the haste to get things done. We move from project to project without delay so that productivity won’t screech to a halt.

We give curiosity short shrift, believing that’s what we need to do to get stuff done. So, why should you care about keeping employees curious?

A state of curiosity survey by Harris Poll showed employees think curiosity should be more important:

There are small but effective ways to keep employees eager to learn new things. Start with these seven ideas shared by successful managers and business leaders:

Give some of the big stuff to the rookies once in a while.

This levels the playing field for entry- and mid-level employees to come up with and implement top-notch ideas, instead of assuming that’s the job of the higher-ups.

Some of the best ideas come from within the ranks. New people sometimes look at things with fresh eyes and are eager to see change.”

Let employees who come up with novel ideas spearhead efforts to get them into practice, and let them know you’ll help but that it’s mainly their move. With that in mind …

Stay out of the way

There’s no sense in encouraging employees to express ideas only to cheer them on – then stand in the way of making them happen.

If you’re just giving lip service to employees’ contributions, they’ll recognize right away that you don’t take their ideas seriously enough to act on, and they’ll stop showing the curiosity you’re looking for.

Albert Einstein said,  “I have no special talents, I am only passionately curious.”

It’s impossible to know if employees have curiosity unless you allow them to ask questions. Organizations can snuff out curiosity by dismissing questions that could lead to new discoveries.”

If your employees aren’t big questioners, you can prompt them to do more asking. At meetings or presentations, tell employees to jot down at least three questions that occur to them during the discussion. If they don’t get to ask them during the meeting, tell them to send them to you afterward.

Even if most questions already have answers, this still provides you with an idea of how each employee is thinking about what was presented, and may even open up avenues you didn’t think of during the meeting.

You’re never going to get curiosity from your employees unless you actively mine them for ideas.

When you sense that your team has grown weary doing the same old things you tell them to do, it’s time to open it up to suggestions. If they’re curious enough to question the old, familiar processes, they might have thought of a more effective way to get things done.

See what’s churning beneath the surface when you hold regular briefings, especially those that commonly address the same problems or issues. You shouldn’t be the only one directing all the ideas and solutions for every single project.

Frame learning as a perk

Many managers think that if they encourage employees to take seminars or attend conference sessions to keep up with field advancements, the employees will think it’s just another job requirement. This tends to dampen their curiosity to learn more.

When you present learning opportunities in a more positive light, employees will feel you’re invested in their success, both in the present and the future. Employees will be happier and more fulfilled, and your company will reap the benefits.

Move coaching to the front burner

The best way to get the most curiosity out of coaching is by providing a one-on-one experience with employees.

Remember: You’re not the only one who can coach; enlisting knowledgeable employees as coaches can benefit their co-workers and their entire team.

Be good with feedback

When employees are unprepared for specifically targeted feedback, they’re likely to shut down, causing your coaching efforts to be wasted and potentially even backfire.

Any curiosity they had they’ll try to hide because they don’t want to ask “dumb questions” and come across as naïve.

Even well-intentioned coaching, especially in a one-on-one setting, can have a negative personal impact.

Make sure that even if you have to give some not-so-positive feedback, you at least commend the employee for making a good effort, especially if it involved showing curiosity and taking risks.

Keeping employees curious is an often understated but critical part of any manager’s job. The trick is to keep them engaged and invested enough so it rises to the surface – without you needing to fish for it.