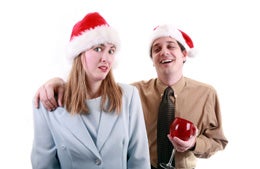 While many employees have been subjected to awkward situations or obnoxious drunk co-workers at the office Christmas party, some have stories that really stand out.
Business Insider assembled a list of the wildest holiday party mishaps that sound like they’re straight out of a Christmas episode of “The Office.”

1) A janitor was retiring the day of the holiday party. No other employees had interacted with him much, so they were surprised when he gave them all presents: Bottles of sulfuric acid. He had hated each and every one of them.
2) The whole office accidentally got sent an email inviting them to the holiday party meant just for the executives. A follow-up email came out, uninviting them all.
3) A drunk employee was complaining about an assignment to someone, and said not to tell their boss. She was talking to her boss.
4) One employee’s husband had so much to drink he passed out 30 minutes into the party.
5) Someone’s boss made out with a mop.

6) One employee had too much to drink and was telling a story. She got caught up in it, and swung her arms for emphasis. She accidentally hit the beer bottle another employee was drinking out of, chipping her tooth. The employee had to go to the dentist to repair the damage.
7) A few employees challenged someone to eat an entire ghost chili pepper. The employee bit down on the whole thing, turned red, had hallucinations and vomited all over the floor. He couldn’t taste food for several days after the incident.
8) One employee got drunk and tried to fight someone. He raised his fist and swung, lost his balance and broke his arm and his tooth. The cops showed up and he was fired.
9) An anxious employee got drunk to calm his nerves. Within 20 minutes, he ended up falling down a flight of stairs and crashing through the screen door in front of everyone. He apologized and ran out, saying his ride was there (which it wasn’t). He ended up waiting in the bushes down the street for two hours until he got picked up.

10) A drunk CEO announced he would take the whole company on a trip to Cancun … and a few months later he actually followed through on his promise.
11) A few days before the holiday party, the boss sent out an email saying he would NOT be bailing anyone out of jail. Apparently, the year before he had to do just that.
12) One office had hired a hypnotist for the party. He managed to hypnotize a woman, who ended up lifting up her dress and stuffing imaginary hundred dollar bills into her stockings — on stage, in front of everyone.