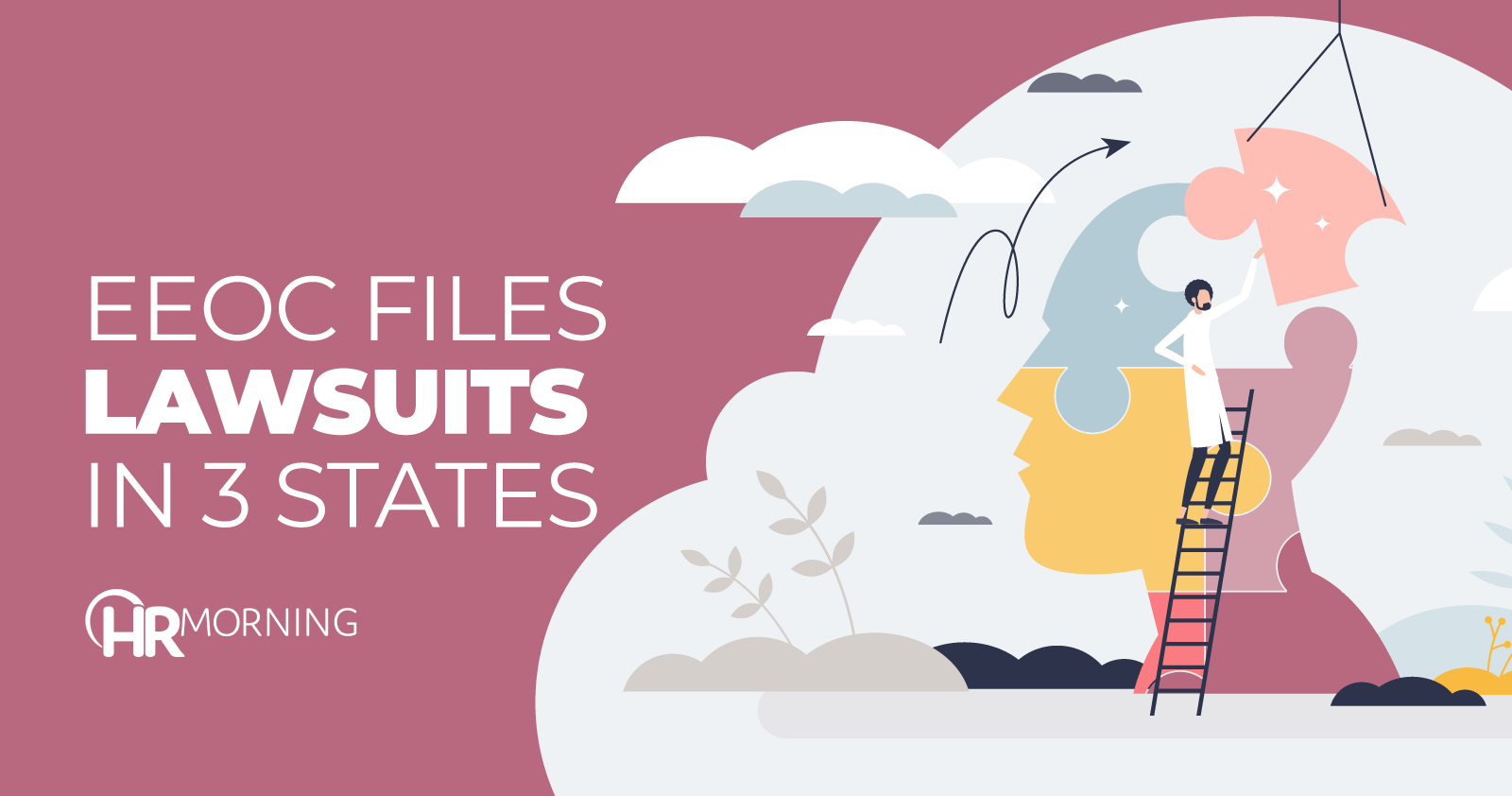 Three newly filed lawsuits highlight the critical importance to HR pros of understanding how the Americans with Disabilities Act (ADA) applies to applicants and employees with mental disabilities.

In a span of just five days, the Equal Employment Opportunity Commission, which enforces the employment provisions of the ADA as well as other federal laws against discrimination, filed new suits against separate employers in three different states.

In combination, the suits allege wrongful revocation of a job offer, unlawful refusal to hire, and denial of reasonable accommodation.

In the first suit, the agency’s field office in Tampa went to court on behalf of a veteran who sought a job at a senior living residence called the Princess Martha. The EEOC’s lawsuit says the applicant told the employer during an interview that she has post-traumatic stress disorder. Princess Martha offered the applicant a job conditioned on a negative drug test, and the applicant informed it that she would not be able to pass the test because of legally prescribed medications she is required to take.

When she took the drug test, the applicant received a “non-negative” result, the suit says. A few days later, Princess Martha revoked the offer without offering any explanation, the agency alleges.

The suit asserts a violation of the ADA, and it seeks to recover back pay as well as compensatory and punitive damages.

The takeaway here: While post-offer drug testing is allowable under the ADA, employers should give applicants and employees who are subjected to such testing an opportunity to show they are lawfully taking drugs and that those drugs may produce a positive test result. Essentially, that is exactly what the EEOC says the employer did not do in this instance.

The ADA does not protect those who use drugs illegally. In addition, the legal use of drugs can render an applicant or employee unqualified, especially in safety-sensitive positions. Here, however, at this time there is no indication that either of those circumstances is at hand.

In the second suit, the agency’s Philadelphia office has filed a lawsuit on behalf of a former help desk technician with a schizoaffective disorder. The suit says the technician worked for the Sinclair Broadcast Group at a location in Cockeysville, Maryland. The agency asserts that the employer suspended and then fired the technician after it learned about her mental disability.

The suit, filed in a federal district court in Maryland, is asking the court to award permanent injunctive relief as well as lost wages, compensatory damages and punitive damages.

This is a straightforward allegation of pure disability bias, and it reminds employers of the need to avoid making any employment decisions that are based on fear, myths or stereotypes relating to mental illness and disability in general.

When evaluating employees and applicants with mental illnesses, employers must be especially careful to focus on qualifications and conduct rather than stereotypes or labels. If a mental illness creates a serious threat or otherwise renders an applicant or employee unqualified, employers can decline to hire or retain them without violating the ADA.

In the third suit, the EEOC’s New Orleans field office sued Eagle Marine Services Electrical & Refrigeration, LLC, a marine services company that is based in Louisiana.

This suit alleges that the employer withdrew a job offer for a marine electrician position after a company-ordered medical examination showed the applicant had attention deficit hyperactivity disorder and took prescription medication to treat it.

Instead of determining whether the individual’s condition and use of medication would negatively impact his ability to do the job, the employer decided not to hire him based on stereotypes about his condition, the suit says.

Again, keep in mind that stereotypes about mental disabilities unfortunately remain prevalent. But relying on them to make employment decisions is a surefire way to land in legal hot water.

Here are your key takeaways: