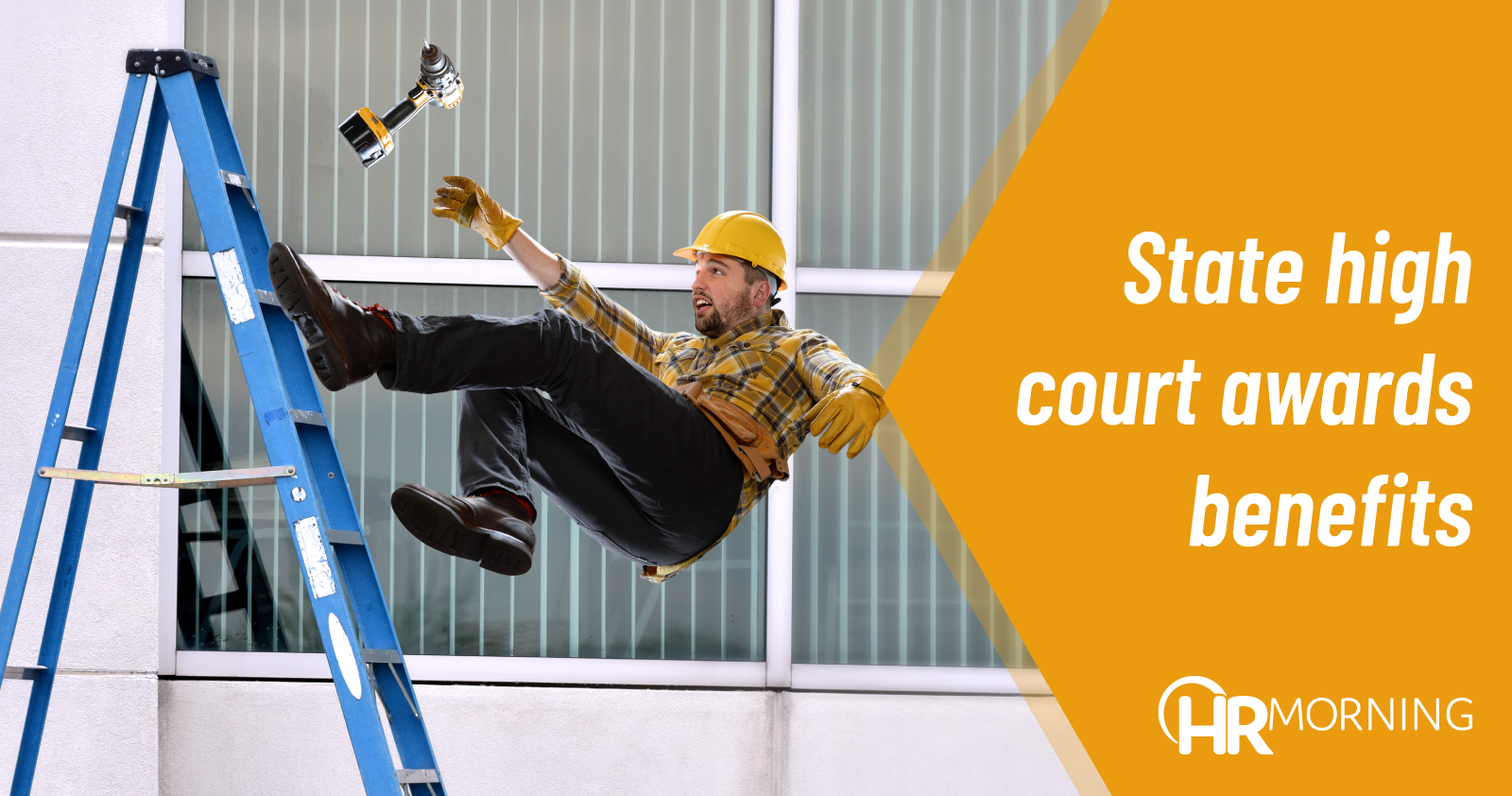 In what has to be a frustrating decision for all employers, Alaska’s highest court ruled that a carpenter who admitted to using both alcohol and cocaine before getting hurt on the job was nonetheless entitled to workers’ comp benefits.

The reasoning behind the ruling? The accident would have happened even if he had not used alcohol or drugs that day.

In 2011, Virgil Adams was fixing a roof on a rental property when a ladder he was using gave way and he fell about 30 feet. The fall produced permanently disabling injuries.

Adams admitted that he drank beer and used cocaine before the accident happened. He said the rental property’s owner supplied the cocaine, and he described the job site as “a revolving frat house” where beer was readily available. He also admitted that he did not inspect a support for the ladder before he climbed it.

No workers’ comp coverage for owner

The property owner did not have workers’ compensation coverage, meaning that a state fund would be on the hook if it was determined that benefits were due.

When Adams filed a claim for workers’ compensation benefits, the fund said no benefits were due because Adams was intoxicated when he fell.

At a hearing, a paramedic who responded to the accident said Adams told him he had three beers, but he also said Adams did not look intoxicated. His eyes were not bloodshot, the paramedic testified, and he did not slur his speech.

Emergency room records indicated that Adams had alcohol on his breath when he arrived for treatment. A blood test showed a level of alcohol within the legal limit for driving, while a urine drug screen was positive for cocaine and no other drug.

A doctor hired by the fund testified that there was enough alcohol in Adams’ system to impair his balance, speech, reaction time and judgment. He said Adams’ injuries were caused “in large part” by his impairment. He added that mixing alcohol and cocaine “would certainly impair somebody’s judgment more.”

However, he also admitted on cross-examination that he did not know exactly when Adams drank the beer, a fact that could affect the accuracy of his assessment.

The fund did not discuss in detail how intoxication directly caused Adams’ injuries, and a state workers’ compensation board rejected its claim that it did. It noted that the doctor did not know when the beer was consumed or how strong it was. It said the doctor’s opinion about Adams’ level of impairment was “at best, an educated guess.”

And it added that different people experience different impairment levels from drinking the same number of drinks. Ultimately, it concluded that Adams did not fall due to intoxication. As a result, it found he was entitled to benefits. There was no logical connection, it said, between the ladder support problem and Adams’s drug and alcohol use.

A state workers’ compensation appeals commission affirmed the board’s decision that Adams’ injury was not caused by his intoxication. It said there was no evidence showing Adams would have checked the ladder support if he was sober.

The fund filed an appeal with the highest state court in the state of Alaska.

No benefits are due if a worker’s intoxication proximately causes their injury, it said. But there is a presumption that it did not, the court added. The fund had the burden of proving that Adams’ intoxication caused his injury and did not meet that burden, the high court ruled.

The fund argued that Adams did not properly inspect the ladder support because he was intoxicated, but that argument assumed that the support’s weakness was apparent, the court said. The court also ruled that the board was entitled to give little weight to the doctor’s testimony because that testimony was based on assumptions about when Adams drank and when his blood alcohol level peaked.

In addition, the commission properly deferred to the board’s assessment of witness credibility, the court said.

Further noting that the accident was “unwitnessed for the most part,” the court upheld the finding that Adams was entitled to benefits.

State workers’ compensation laws vary considerably. But this case shows that they can be very favorable to employees and call for the provision of benefits even when workers are less than model employees.