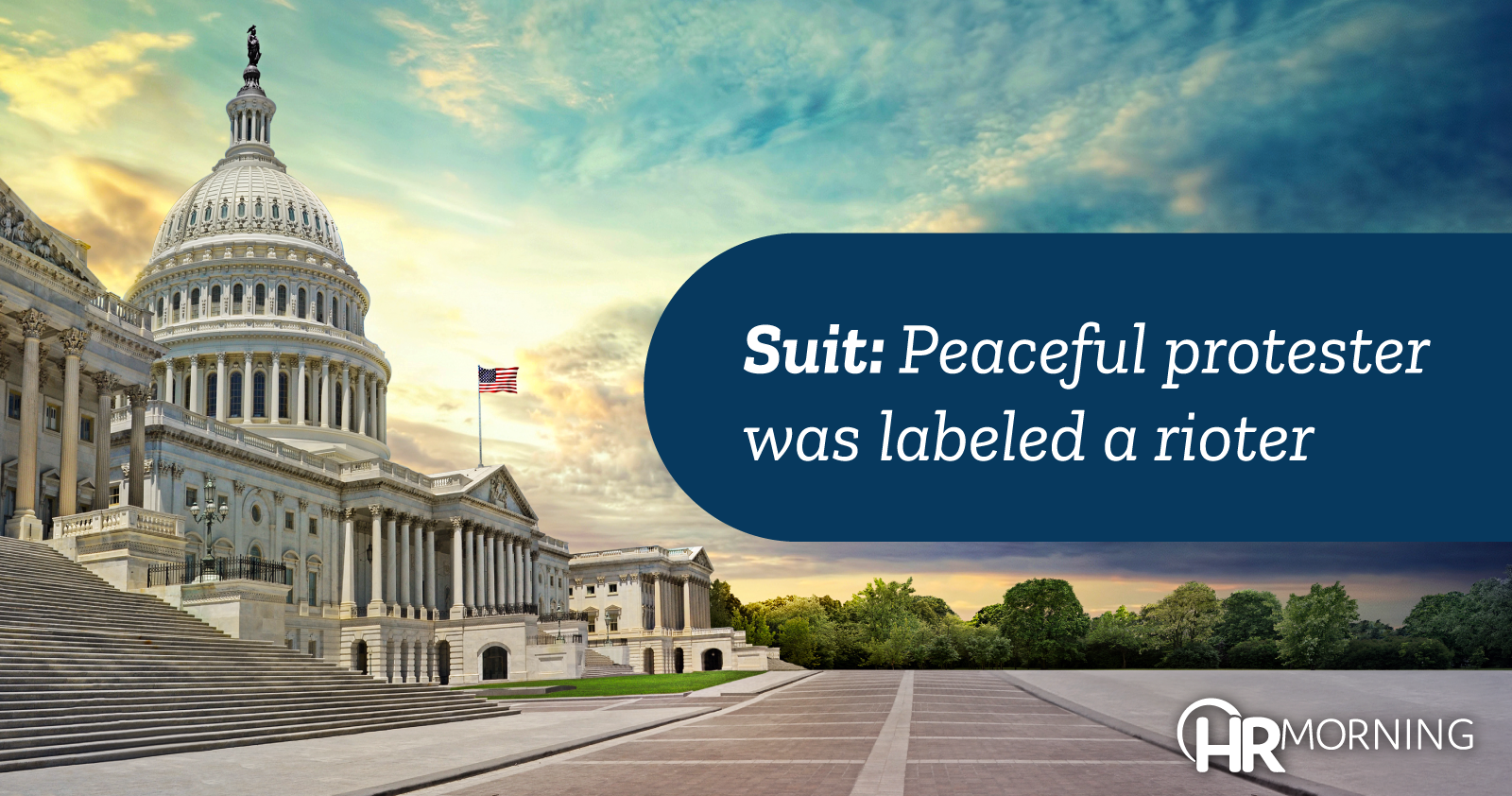 When chaos erupted at the U.S. Capitol in January, there were many people who physically breached boundaries and engaged in violent and criminal behavior.

But there were also many others who simply visited the area, listened to some speeches and went home.

In a new suit, a woman who was fired from her job after arriving home from her visit to the area that day says she falls into the latter group.

And she claims her employer is legally liable for terminating her employment soon after.

Leah Snyder worked for 20 years as a computer programmer for Alight Solutions, which is based in Illinois. Snyder worked remotely from her home in California.

On the day of the Capitol riot, Snyder was on paid time off from work. She visited Washington, D.C., that day.

Snyder, who offers in her court complaint that she “is not a zealous adherent of any system of beliefs,” says she listened to some speeches, walked to the Capitol, and left.

She adds that she asked police officers several times if walking to the Capitol with other crowd members was legal and that they repeatedly told her it was.

When she got to the Capitol, she took some selfies with friends.

She says she neither participated in nor saw any rioting and did not hear about any injuries or property damage during her visit.

On the day after she got home, Snyder made a fateful decision to post two selfies to a social media comment thread of someone named Sean Armstrong.

Not surprisingly, things got ugly from there. Another commenter jumped in, posting comments that “call[ed] her the most vile and vicious insults in the human vocabulary,” according to the suit. Then, someone – the lawsuit says it was “probably” Armstrong – posted the written comments from the social media page to Alight’s website.

The suit alleges that the comments were defamatory. Snyder complained to an Alight human resources supervisor about the posting to the website. It was just two days after the riots at that time.

Within 48 hours after her report, her employment was terminated, purportedly for “participation in a riot,” the lawsuit alleges.

The suit says there was no investigation or explanation – and no protection offered from the reported cyberbullying. It adds that Alight has a code of conduct that encourages its employees to report harassment to human resources without fear of retaliation. That is exactly what Snyder did, the suit says.

Snyder’s suit, which was filed in a California federal district court near the end of January, presents three separate causes of action.

First, the suit alleges violation of a California statute called the Tom Bane Act, which generally bans people from interfering with another’s exercise of their constitutional rights.

The suit says the defendants, which presently include Alight along with 10 “John Doe” defendants, violated this law by intentionally interfering with Snyder’s civil rights by threats, intimidation or coercion. With respect to this count, it adds a specific allegation that the defendants retaliated against Snyder for exercising her right to speak freely and peaceably assemble.

The alleged conduct has caused Snyder to to suffer “worry, fear, anxiety, sleeplessness, pain and suffering,” the suit alleges.

Alight acted “purposefully, maliciously and oppressively to deprive [Snyder] of her constitutional rights,” the suit says.

A second count in the suit alleges wrongful termination in violation of public policy.

It says Snyder had a contract of employment with Alight and that the contract included an implied provision that Snyder would not be discharged without good cause.

The second count also cites a state labor code section that bars employers from controlling or directing the political activities of their employees.

Alight and the other defendants discharged Snyder because she exercised her constitutional right to speak freely, the suit repeats.

In the final count of the complaint, Snyder alleges breach of the covenant of good faith and fair dealing. She substantially performed all of her job duties, she says, and Alight terminated her on the pretextual grounds that she engaged in rioting or trespassed, it says.

As relief, the complaint asks for “at least” $3 million in economic damages and another $7 million in general, special and non-economic damages. Snyder also wants Alight to restore her to to her former position and provide her back pay.
It further asks for attorneys’ fees, costs and prejudgment interest.