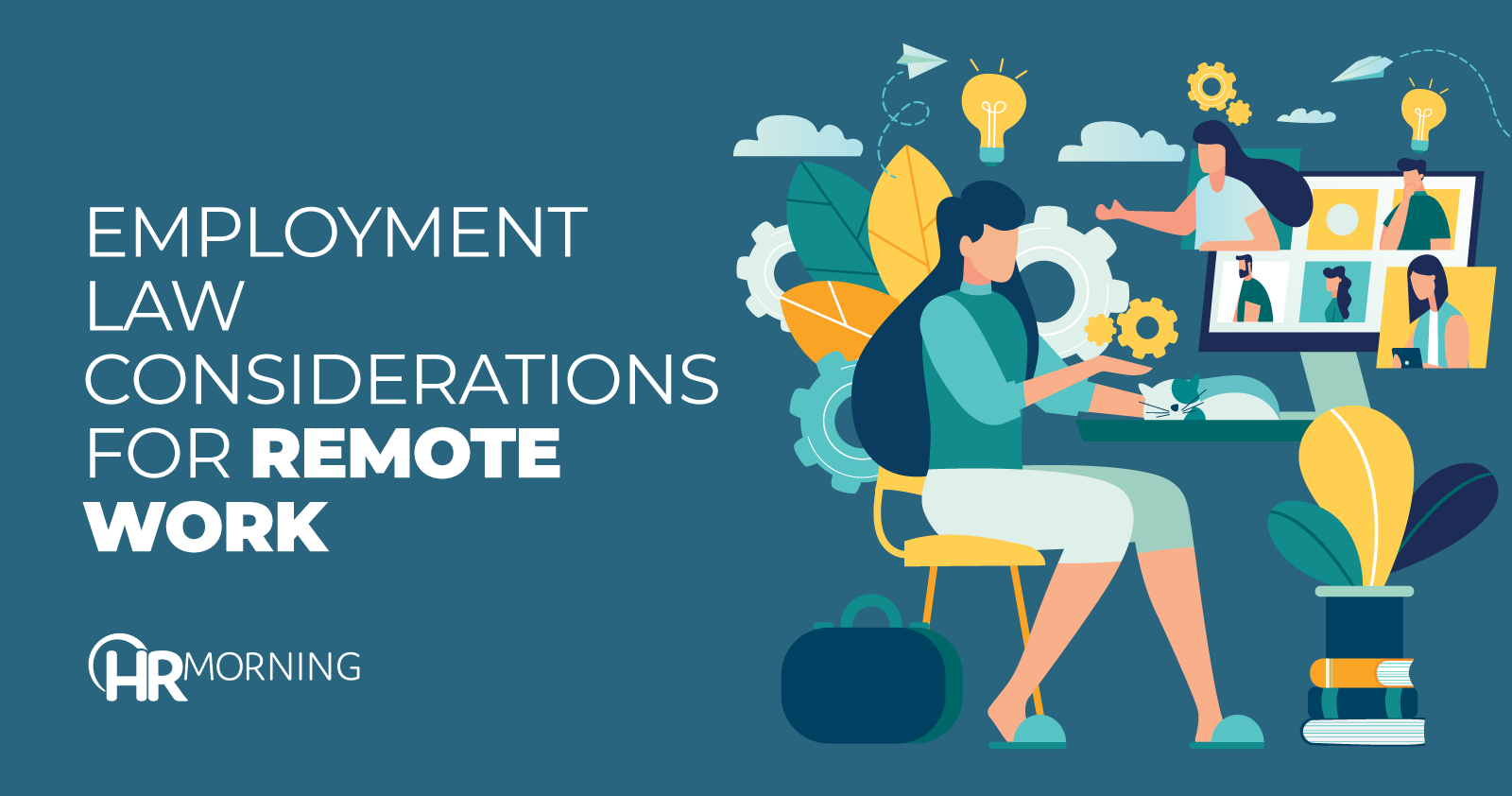 This case shows just how tricky things can get when the ADA and FMLA overlap. Here, an employee exhausted her FMLA leave and then sought an accommodation: remote work.

When the company — a law firm — denied her request to work from home, the employee didn’t return to the office. Instead, she sued, alleging violations of the ADA and FMLA.

In March 2020, a law firm in Tennessee sent an email to employees outlining its planned response to the COVID-19 pandemic. Specifically, the email emphasized the firm’s intention to stay open and continue providing services to clients. It also said if “you are concerned about continuing to work during this situation and wish to remain at home on an unpaid basis, you are welcome to do so.”

Julia Russo was a legal assistant at the firm. Relevant here, she has a family history of Guillain-Barre syndrome (GBS). When the pandemic hit, Russo began suffering from “severe anxiety related to being potentially exposed to COVID-19,” based on her belief that her family history of GBS increased the risk of death or serious illness if she contracted COVID-19.

In mid-April, a co-worker began experiencing symptoms. She notified her supervisor and also texted colleagues – including Russo – that she was going to get tested for COVID-19.

When Russo received the message, she immediately left. Russo sent a text to the office manager, explaining that she would use PTO due to her increased risk of complications. According to Russo, the company didn’t require workers to wear masks or take any steps to stagger shifts that would reduce the number of employees working in the open floor plan.

The next day, the office manager notified HR about the situation and reported that Russo would be out the rest of the week and that she planned to use PTO until the co-worker got the results of her test.

That afternoon, Russo texted the office manager and the supervising attorney. In it, she explained her concerns due to her family history of GBS, which caused her a lot of anxiety. She said her doctor cautioned that she should stay home due to “being in a higher risk pool.” She said that she would provide a doctor’s note and requested an accommodation to work remotely for at least a month.

The office manager forwarded the text to the firm’s administrative partner who was considered “the highest member of management.” He replied: “Not letting them work from home.”

On April 24, the office manager and the supervising attorney had a conference call with Russo, notifying her that she was covered by PTO through the end of the day. She could either return to work or seek FMLA leave.

She opted for FMLA leave. In the paperwork Russo submitted, the doctor indicated that Russo had “situational anxiety” and that “[h]er workplace does not protect her against Covid-19, and she has been denied work at home status. Given her family history of [GBS], this is ludicrous.”  The paperwork stated that she should be on leave through June 1, 2020.

The company did not seek further documentation and determined Russo was entitled to FMLA leave.

On May 27, Russo sought to extend her FMLA leave, as per her doctor’s advice. The company authorized the leave through July 16.

On July 8, Russo emailed the company seeking another FMLA extension. She also questioned why her accommodation request of working remotely had been denied.

The supervising attorney forwarded the email to the partner, who replied: “Lets accom[mo]date her by firing her. Su[cep]tibility to covid is not a disability.” To this, the HR manager responded that Russo could request an ADA accommodation based on anxiety. The email exchange also included discussions about Russo’s request for another FMLA extension and her accommodation request.

Ultimately, the partner replied to Russo’s email. Regarding the FMLA extension, the firm agreed to extend her leave 30 days, through Aug. 16. He also wrote: “I do need to note that we are not required to hold your job after July 16th. If a position is available after this date and you are ready to return on site and work in the office, we will consider you for any openings we may have at that time.” But the firm denied Russo’s accommodation request to work remotely, saying it would cause an undue hardship.

At that point, Russo and the partner exchanged lengthy emails. Russo sought clarification about the statement that the firm agreed to extend her FMLA but would not hold her job through the listed date, which she said meant that her return was only possible if a vacancy were open.

The court said the partner’s reply “muddied the waters further.” Specifically, he wrote that the firm “will consider you for any openings the firm has at that time.”

Russo did not return to work on Aug. 17. She alleges that she called the office manager and left a voicemail that was not returned. On Aug. 18, the firm emailed Russo, sending a notice of separation as required by state law, which said the employee “quit.” The explanation provided was: “Employee didn’t return to work.”

Russo sued, alleging violations of the ADA and FMLA. The law firm filed a motion to dismiss.

To state valid ADA claims, Russo had to allege: 1) she has a disability; 2) she was qualified for her position; and 3) she was either denied a reasonable accommodation for her disability or was she was subject to an adverse employment action that was made solely due to her disability.

First, the company argued that “anxiety related to fear of contracting COVID-19” is not a disability. It insisted that the ADA does not apply to “transitory impairments” and pointed out that the doctor did not indicate that Russo’s anxiety was “expected to have a duration of more than six months.”

The court was not swayed, because under the ADA, “[a]n impairment that is episodic or in remission is a disability if it would limit a major life activity when active.”

Moreover, ADA regs clarify the “effects of an impairment lasting or expected to last fewer than six months can be substantially limiting” for the purposes of proving an actual disability. The specific section that the company referred to applies only to individuals who are “regarded as” having a disability, the court explained, so it was not relevant here since Russo alleged that “she has an actual impairment.”

Next, the company argued that Russo’s “preference” to work from home didn’t support her disability claim.

The court also rejected this argument. Russo had alleged that she suffered “severe anxiety related to being potentially exposed to COVID-19,” particularly due to her heightened risk due to her family history of GBS, the court pointed out. Further, Russo’s doctor diagnosed her with “situational anxiety” and called it “ludicrous” that the company wouldn’t allow her to work from home in light of her risk factor.

Remote work – Is it a reasonable accommodation?

That directly contradicted Russo’s claim that she “could perform all of her essential job functions remotely,” the court pointed out. And at this early stage in the proceeding, the court said it had to accept the plaintiff’s allegations as true. Moreover, under the ADA, courts are required to give “consideration” – not “deference” – to an employer’s determination about essential job functions, it explained.

In the court’s view, Russo plausibly alleged that she was disabled under the ADA, that she was qualified for the position and that she was denied a reasonable accommodation. As such, the court denied the company’s motion to dismiss the ADA discrimination claim.

To support her ADA retaliation claim, Russo alleged that she requested an accommodation for her disability and suffered an adverse action because of that request.

In response, the company argued that Russo could not show its proffered reason for her termination was pretextual.

The court said that argument was “misplaced,” because the referenced McDonnell Douglas burden-shifting framework “does not come into play” during the motion to dismiss stage.

Here, Russo’s complaint contained allegations that could convince a reasonable jury that she was fired for requesting an accommodation for her disability. As such, the court refused to dismiss the ADA retaliation claim.

Russo alleged an FMLA interference claim that hinged on a math dispute. Specifically, she alleged that the company incorrectly calculated her leave to expire on July 16. In reality, she said it did not expire until July 20. As such, she says the company only provided her with 11 weeks and three days of leave, which interfered with her rights under the FMLA.

Even if her math was correct, the claim still failed, the court said. Why? Because she did not allege that she would’ve been medically ready to return to work on July 21. It’s well established in the Sixth Circuit that “an employer does not violate the FMLA when it fires an employee who is … unable to return to work” at the end of the 12-week period of leave.

Thus, the court granted the company’s motion to dismiss the FMLA interference claim.

To state a valid FMLA retaliation claim, Russo had to show – among other things – a causal connection between her protected activity and the adverse employment action.

The company argued that she couldn’t show this connection because she never returned to work.

Pointing to the partner’s email, Russo alleged that it showed his reference to her “additional leave” was a “sham” because he “stated that the company would not hold” her job open beyond 12 weeks, “meaning he had decided by July 15 to terminate her employment.” She also said the lengthy emails showed the partner was “angry” with Russo for taking FMLA leave.

Acknowledging that the FMLA retaliation claim was “weak,” the court decided that Russo plausibly alleged she engaged in a protected activity by taking FMLA leave, that she suffered an adverse employment action, and that the decision to terminate her was made “before the expiration of her extended leave period,” which gives an inference of a connection between the two. That was enough to allow the claim to proceed, the court held.

When the ADA and the FMLA overlap, staying compliant with both laws can create challenges for employers. As this case shows, it can even be tricky for a law firm. Here are three best practices to help you get it right: