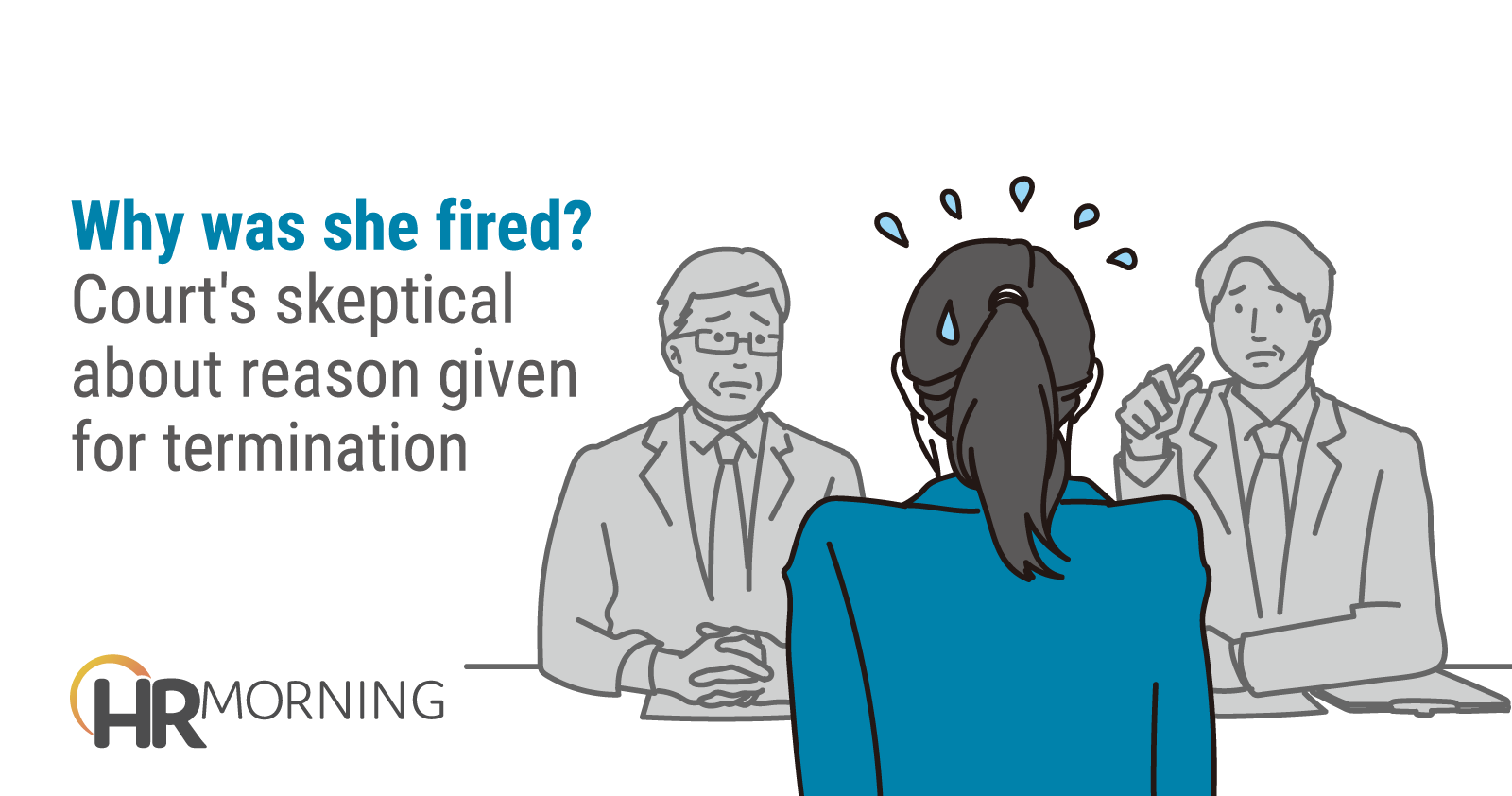 A termination is justified if an employee is caught stealing, right? Not necessarily. This case shows that everything isn’t black and white — especially when managers make mistakes during the termination process.

Key takeaways for HR: Not every manager has received training to properly handle the dreaded termination talk. That’s why it’s crucial for HR pros to establish best practices for termination, such as:

This checklist may help your managers avoid the kind of mistakes that hurt this company in court.

Throughout her employment, Lugo suffered from fibromyalgia and depression – health conditions that occasionally required her to take intermittent FMLA leave. And to accommodate Lugo’s fibromyalgia under the ADA, Walmart agreed to provide “a stool or chair when [Lugo] needed to work behind a desk or counter.”

At some point during Lugo’s employment, Walmart began distributing “Happy to Help” coupons to cashiers, who were supposed to hand them out to customers. The coupons were worth 50 cents each. Printed on the back, the coupons stated: “Not valid for Walmart associate use.”

In August of 2019, Walmart identified a few employees who were suspected of stealing company property. As part of the company’s investigation, an asset protection manager reviewed surveillance footage. He said the footage showed that Lugo, on four occasions, used the promotional coupons in transactions for herself and fellow Walmart associates.

After the meeting, Lugo said she “invoked Walmart’s ‘open door’ policy” to discuss the termination with the store manager. At that time, according to Lugo, the store manager said that the decision was “out of her hands.”

Turning to the ADA claim, Lugo claimed the store manager and her immediate supervisor “often refused to honor her accommodation.” She also alleged that when she discussed her disabilities with the store manager, the manager said she was “faking.”

As an FYI, it’s unclear who actually made the call to terminate Lugo. The asset production manager said he didn’t recall making the decision. He said that he didn’t have the authority to fire Lugo because “Walmart employees cannot be terminated without the approval of the store manager.” He testified that Walmart had a “zero-tolerance policy” with respect to employee theft, but he later conceded that “the core values of Walmart” did not contain such a policy.

But the court rejected this argument for two reasons. First, the store manager was “a central part of the decisionmaking chain.” And second, genuine questions existed as to the store manager’s role in Lugo’s termination – especially since the asset manager testified that he had no authority to fire Lugo without the store manager’s approval, the court pointed out. As such, Lugo stated a prima facie case of disability discrimination, the court determined.

To establish a prima facie case of FMLA retaliation, Lugo had to show: 1) that she took FMLA leave; 2) that she experienced an adverse employment action; and 3) that a causal connection existed between the leave and the adverse action.

Walmart said Lugo failed to show the causal connection, as “the four-month gap” between the leave and the termination was too long to show “retaliatory intent.”

The court agreed that alone, a four-month gap wouldn’t be enough to suggest FMLA retaliation. But here, Lugo also alleged the store manager “displayed a general hostility” toward Lugo about her disability. The court noted that the text messages revealed a “pattern of hostility” and a “pattern of antagonism.” Considering the full record of evidence, the court said Lugo stated a prima facie case of FMLA retaliation.

The court analyzed her claims under the familiar burden-shifting framework established by the U.S. Supreme Court’s ruling in McDonnell Douglas Corp. v. Green.

Walmart said Lugo’s termination was due to her alleged misuse of the coupons, which amounted to employee theft.

Giving weight to the nominal dollar value attached to the coupons, the court was skeptical about Walmart’s proffered reason for Lugo’s termination, noting two key problems.

First, neither manager would admit to being the person that made the termination decision. That alone “is circumstantial evidence that would allow a factfinder to doubt Walmart’s proffered reasoning,” the court said.

In addition, Walmart actually has a “progressive discipline policy that makes no reference” to the “so-called zero-tolerance policy” that was used to justify Lugo’s termination. This “could reasonably be viewed by a jury as evidence of pretext,” the court explained.

Finally, Lugo’s testimony that other employees used the coupons without being fired could also allow a reasonable jury to be skeptical about Walmart’s proffered reason for termination.

As such, the court denied Walmart’s motion for summary judgment on the disability discrimination and FMLA retaliation claims.