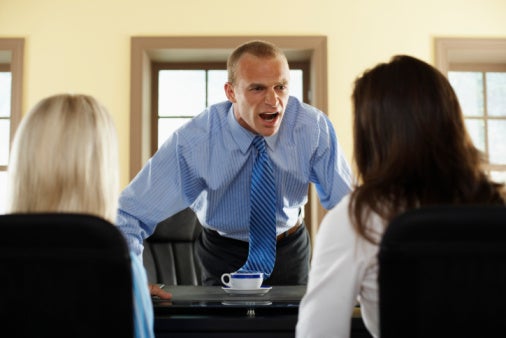 Employers can breathe a sigh of relief. Common sense just won the day in a U.S. appeals court.

In overturning a jury’s verdict, the U.S. Court of Appeals for the Ninth Circuit just ruled that being a “cantankerous” person doesn’t render one disabled and entitled to employee protections under the Americans with Disabilities Act (ADA).
It’s a little troubling the case had to reach the appeals stage. But employers can take solace in the fact that a practical decision was eventually rendered that doesn’t move them closer to allowing the inmates to run the asylum.

Matthew Weaving was a police officer for the City of Hillsboro, OR. He was employed there for more than two years before he was eventually terminated because of severe interpersonal problems between himself and his co-workers.
Apparently, Weaving had a problem working with peers and subordinates, but — suspiciously enough — not with his superiors or the general public.
One lieutenant wrote that Weaving had created and fostered a hostile work environment for his subordinates and peers.
As an example of his behavior with subordinates, which some called “intimidating” and “demeaning,” the court presented an email that Weaving wrote in response to a question about his decision to have two cars towed.
Weaving’s email read:

I’ll respond to the second part of your inquisitive email [the part about the two cars] with a metaphorical analogy. Envision a swimming pool with a deep end and a shallow end separated by a floating rope. . . .
There are many more potential hazards in the deep end and a person would be foolish to venture there without the technical expertise, stamina and initiative to keep from drowning. There are countless people who are good swimmers but still remain in the shallow end for fear of the potential danger the deep end harbors. Still, there are others who negligently and recklessly venture to the deep end without any technical proficiency and tragically drown. My recommendation to you is that you remain in the shallow end where you can splash around with the kids.
What really upsets me about your inquiry is not the simple fact that you question my judgment and knowledge but the manner in which you have done so. If you have any desire to discuss this incident further or any other incident please do not do so in a public record email, come and find me any day of the week! I’m easy to locate, I’m in the deep end so bring your water wings!

Weaving suffered from attention deficit hyperactivity disorder (ADHD), which he claimed was the root cause of the interpersonal problems.
As a result, Weaving sued the city following his termination, claiming Hillsboro had discharged him because of his disability in violation of the ADA.
As you know, an employee is considered disabled if he or she has a condition that limits a major life activity. Well, Weaving claimed his ADHD limited his ability to engage in the major life activity of working and interacting with others.
Weaving’s case went before a district court and a jury, which sided with him. He was awarded $770,000.
The city appealed.

The appeals court, however, saw things much differently.
In reversing the jury’s verdict, it said that a reasonable jury couldn’t have found that Weaving’s ADHD substantially limited his ability to work or interact with others.
In other words, Weaving wasn’t a disabled individual who qualified for the ADA’s protections.
The appeals court said there wasn’t enough evidence to prove that Weaving’s ADHD affected his ability to work. The court based it’s decision on two main points:

These two findings, according to the appeals court, provided enough evidence to show that Weaving’s ADHD didn’t affect his ability to work.
In remanding the case back to district court, the appeals court said:

… a “cantankerous person” who has “[m]ere trouble getting along with coworkers” is not disabled under the ADA.

Some unfriendliness with coworkers or a supervisor would not, standing along, be sufficient to establish a substantial limitation in interacting with others.

And finally, the court added:

One who is able to communicate with others, though his communications may at times be offensive, “inappropriate, ineffective, or unsuccessful,” is not substantially limited in his ability to interact with others within the meaning of the ADA. … To hold otherwise would be to expose to potential ADA liability employers who take adverse employment actions against ill-tempered employees who create a hostile workplace environment for their colleagues.

Employers are no doubt singing the praises of the appeals court in this case, as upholding the jury’s verdict would’ve put them in a difficult spot when it comes to so-called “cantankerous” employees.
The appeals court’s decision at least prevented the bar from being lowered when it comes to what employees would have to do to establish a substantial limitation that would trigger ADA protections.
Still, this case doesn’t give employers the green light to push office jerks out the door. Employers are still obligated to engage in the interactive process when an employee has a known medical condition to see if a reasonable accommodation exists that would allow the person to perform the essential functions of his or her job.
Cite: Weaving v. City of Hillsboro