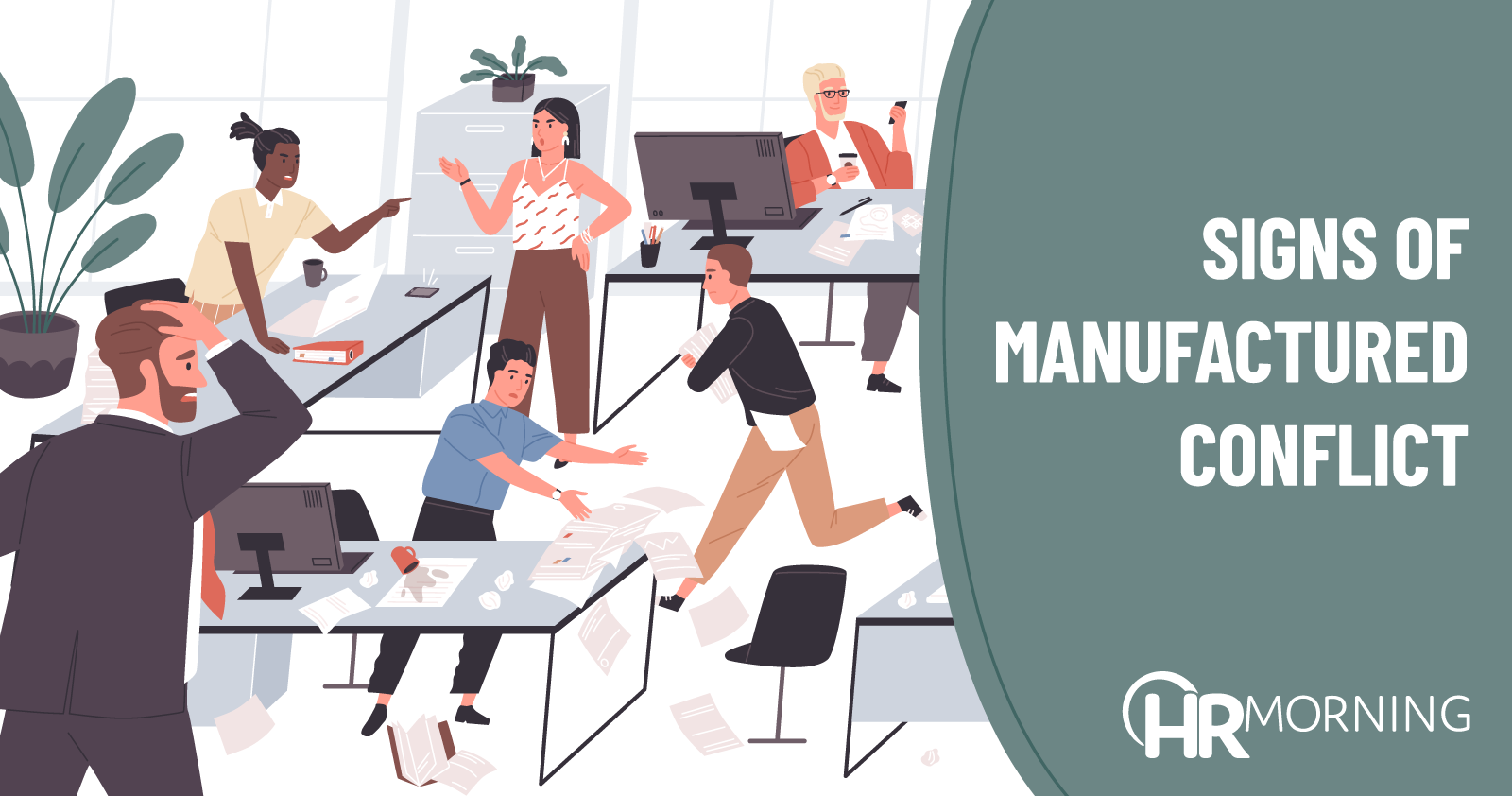 Manufactured conflict – a new form of workplace bullying – within organizations is on the rise, scorching your culture and best performers in its path.

The Healthy Workplace Bill (HWB) proposed legislation could significantly increase the risk to your organization, signaling HR’s need to proactively identify and plan for the downstream impact before it becomes law.

Using a true story, let’s explore how to identify the conflict and implications if the new law is imposed.

She discloses that soon after her new boss arrived at the company, he quickly befriended her, involving her in key meetings, asking for her opinion, and giving her private and public recognition. Within six months he gave her a 20% raise.

A few months later, the boss asked about the performance of a protected class employee in the department. An average performer, she was also a culture carrier. The boss instructed the leader to fire her. When the leader asked on what grounds, the boss replied, “Because I don’t like her.”  When the leader pushed back, the boss replied, “Do you want to be next?” At that point, she began to exhibit physical symptoms: heart palpitations, was diagnosed with shingles, could not sleep or eat, and began to lose her hair.

Weekly one-on-one meetings were filled with gaslighting and psychological manipulation. He would instruct her to change direction on a project one week, and then grill her the next week, asking for her rationale for making the change, always denying he asked her to pivot. He would attempt to playback conversations that never happened, and when she restated her experience, he would insult her by saying she was slow and clearly couldn’t handle the stress of the job.

The boss then began to hire-in individuals he had worked with at his prior company, rotating or firing everyone on the existing leadership team. Soon after the last person was hired, the boss abruptly called the leader out of a meeting, shut the door and stood over her as he yelled accusations in an angry tone, “The P&L numbers she put together were wrong and needed to be corrected immediately.”

Although the numbers had been verified, the boss instructed her to cut the amounts paid to his brother’s company in half, which the leader refused to do. He then told her to change them and sign off or be fired. For the leader, that was the last straw. No one should be forced to act unethically in order to keep their job.

The boss stated that the leader was having difficulty performing. During their first one-on-one meeting, the leader made a statement that she was coming after the boss’s job and would stop at nothing to get it. HR shared some of her accusations, which the boss denied. In fact, he stated she was so incompetent that he had to hire a whole new leadership team because the one she put in place was not up to the job. He was trying to elevate the performance of this department, and his leadership and approach to achieving that goal should not be in question. Her performance should.

So what really happened? At this point, without HR’s quick action, it’s probable the situation will escalate and the company will be placed at greater risk of a lawsuit. But worse yet, the woman leader had a history of high performance, a reputation of ethics and integrity, had some of the highest employee engagement numbers and was on the promising executive list. Is she being targeted by a less promising leader at a higher level with the goal of using manufactured conflict to eliminate her from the company?

Most often this story presents as a ‘he said, she said’ and historically the boss is believed and protected to minimize the company risk. But should he be? In this particular scenario, there were too many signs of manufactured conflict. Key clues included:

Scenario under the new law

If passed, the new anti-bullying HWB will allow her to file a lawsuit against her employer without gagging or suppression. This means her story will most likely be believed in the court of public opinion.

In our next post, I will share some of the most manufactured bully tactics, their effects on your business, and how you can begin to make a case for a strategic shift.

Berta Aldrich, HR Expert Contributor
Berta Aldrich, founder and President of Berta Aldrich Consulting, LLC, is a #15 Best Selling Human Resources Author on Amazon, Author of a #1 ranked book on BookAuthority, Executive Outperformance Coach, Trainer and Speaker. As a former award-winning C-suite executive, she understands the importance of combining leadership, strategy and human capital to drive sustainable results as she works with her clients and speaks to audiences worldwide. She holds a master’s degree with honors in corporate strategy and has trained, coached and mentored thousands of aspiring leaders and executives across the globe. Berta’s portfolio includes radio, articles and podcasts, where she was featured alongside greats Brene Brown, Simon Sinek and Brendon Burchard. For more information, visit BertaAldrich.com or follow her on LinkedIn (Berta Aldrich or Winning the Talent Shift page), Instagram or on Twitter @bertaaldrich.