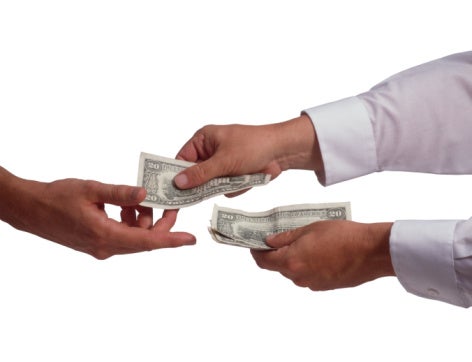 The law specifically says FMLA leave is to be unpaid. But can that regulation be taken at face value? Apparently not – because that would make things too easy for employers. Picture this: A salesman establishes a long-term relationship with a customer who places a recurring order every month. And the salesman is paid commissions on each of those orders. Then the salesman goes out on FMLA leave, during which the customer places his regular monthly order.

The question now: Is the salesman entitled to the commissions from the order that was placed while he was out on FMLA leave?

A cursory reading of the law would tell you “no,” he’s not entitled to commissions, because FMLA leave by definition is unpaid — and the law makes no mention of an exception for those paid commissions.
However, a long-standing court ruling tells a different story.

Here’s what happened: Angela Estes was a sales agent for Meridian One Corp. During her employment, she was diagnosed with breast cancer, for which she took FMLA leave.

Despite being out on leave, Estes claimed that the sales she set up prior to taking leave should’ve earned her $1,297 in commissions, which should’ve been paid to her during her absence.

But Meridian refused to pay her the commissions, and Estes sued the company for violating the FMLA.

The company claimed that because FMLA leave is unpaid, an employee has no right to recover commissions earned while out on such leave.

Awarded commissions — and then some

The court, however, shot down the company’s argument for two reasons that were recently pointed out by employment law attorney Brian R. Christiansen of the firm Hellmuth & Johnson:

Of course, a monetary award of $1,297 doesn’t sound like much to write home about. But due to a unique wrinkle in the FMLA, Meridian ended up with a much steeper bill.

Under traditional law, each side of a lawsuit would bear their own attorneys’ fees. But not under the FMLA, which grants courts the power to award attorneys’ fees to a winning plaintiff.

As a result, Meridian was ordered to shell out $76,092 in attorneys’ fees.

This ruling may be somewhat unsettling for employers — and with good reason.

It’s another example that some courts can choose not to take FMLA regulations at face value and instead apply their own broader interpretations to the text — making the law more confusing and harder to comply with.

While in this case it’s easy to see the court’s line of thinking (that bonuses and commissions are closely related), the assumption among employers is that lawmakers go to great lengths to draft long, precisely-worded laws — and accompanying guidance — so as not to leave them open to much interpretation.

As a result, employers craft policies not expecting to be held to standards that aren’t specifically outlined in the laws. After all, it would be nearly impossible to anticipate that a court would interpret a law more broadly than it’s written — and what that interpretation might be.