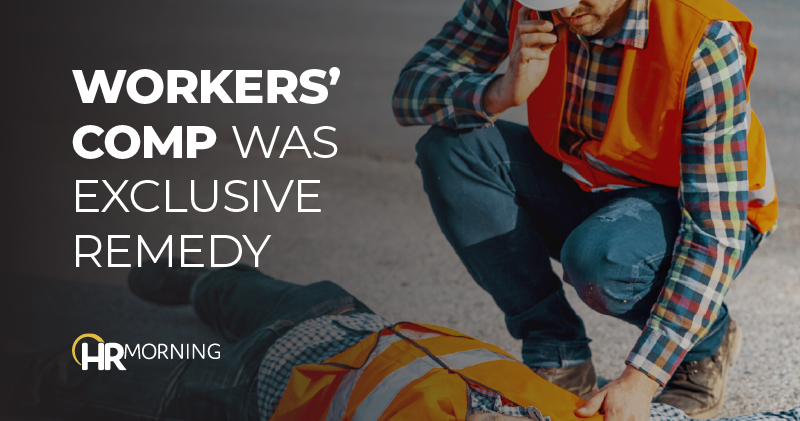 An employee who got workers’ comp benefits after getting hurt at work wasn’t entitled to get additional compensation by suing a co-worker who allegedly caused his injuries, Wyoming’s highest court held.

It’s a tradeoff: In exchange for workers’ compensation benefits in the event of a workplace injury, employees generally give up their right to sue for negligence. But there’s a line that, if crossed, opens the door to additional compensation via litigation.

That threshold was not crossed in this case, the state court ruled.

Workers’ comp after hit by truck

In 2017, Augustine Lovato was working for a company called Knife River on a construction project near Cheyenne, Wyoming.

Tim Case and Ricky Bustos worked with Lovato on the job.

Lovato worked with a crew that formed and finished wet concrete, and Case drove a truck that transported wet concrete to the job site. Bustos was the foreman on the job and acted as a supervisor.

One morning in mid-June, Bustos told Lovato’s crew and Case to move to a new concrete pour site. Bustos and Lovato walked in front of the truck, and Bustos signaled Case to move the truck forward. When Case moved the truck, he ran over Lovato, causing injuries to his foot, leg, back and shoulder.

According to Case, he did not see Lovato in his path. In addition, Case admitted that he was using his cell phone “around the time” that the accident happened.

Lovato received workers’ compensation benefits through the Wyoming Workers’ Compensation Act. He separately sued both Case and Bustos, alleging that they should be held liable for the injuries he sustained because they engaged in conduct that was “reckless, willful, wanton and/or reprehensible.”

After Bustos settled his dispute with Lovato, Case filed a motion for summary judgment. In the motion, he alleged that he was immune from civil liability because his actions were not willful and wanton.

A lower court agreed, and Lovato filed an appeal.

The court explained that under the state’s workers’ compensation law, employers as well as co-workers are generally immune from negligence claims by employees who get hurt while performing what the state law calls “extrahazardous jobs.” In exchange for losing the right to sue, injured employees are generally guaranteed workers’ compensation benefits regardless of fault.

There is an exception: Injured workers can sue if they are hurt because a co-worker “intentionally act[ed] to cause physical harm or injury” to the injured worker, the court further explained.

The question here, then, was whether Case’s conduct in injuring Lovato was bad enough to strip him of the generally applicable immunity from suit.

It wasn’t the court said.

The “intentionally act” language in the law means “willful and wanton misconduct,” the court explained.

In turn, willful and wanton misconduct is doing something – or intentionally not doing something – with reckless disregard and under circumstances that would make a reasonable person know that harm would probably result.

Required showing was not made

To win, Lovato had to show that Case knew of the hazard or serious nature of risk involved; was responsible for the injured worker’s safety; and willfully disregarded the need to keep the worker safe while knowing there was a risk of serious injury or death.

The court said Case’s status as a co-worker, rather than a supervisor, did not by itself insulate him from liability.

But is also decided that Lovato could not win because he did not show that Case acted in reckless disregard of a highly probable and known risk.

There was no good evidence that Case ran over Lovato on purpose, the court said. And while the evidence could support the conclusion that Case was negligent, there was just not enough to show he engaged in willful and wanton misconduct. Drivers routinely drove concrete trucks near pedestrians on job sites, it noted, and Case was following Bustos’ directions and driving slowly when he hit Lovato.

As the case shows, there is a line which, when crossed, enables injured employees to avoid workers’ compensation exclusivity and sue their employers for additional damages. As the case also shows, it can be tough for employees to show the exclusivity rule should not apply.