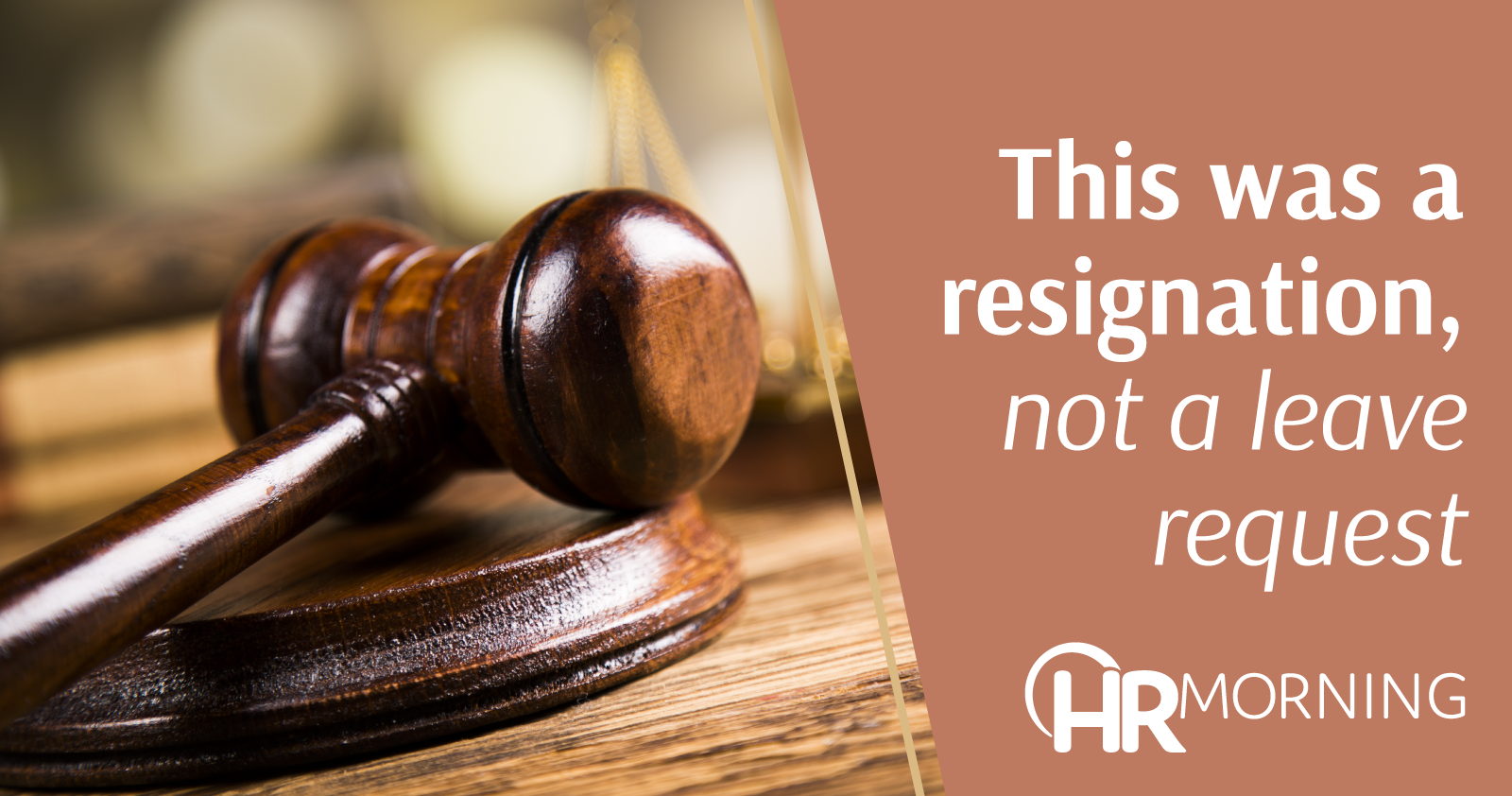 Do you know the duck test?

In Blake v. City of Montgomery, a firefighter-paramedic argued he didn’t resign. He said he asked for a Family and Medical Leave Act (FMLA) leave.

But the Eleventh Circuit found his “leave request” walked, quacked and looked like a resignation. So his FMLA claim couldn’t succeed.

It’s impossible not to have sympathy for this first responder.

Already burned out from working overtime due to staff shortages, he was told while wrapping up a 24-hour shift that he had to stay on to work a 24-hour overtime shift.

Those 48 hours on duty would have led, with no break, to the 48-hour overtime shift he was already scheduled for.

What He Actually Said

But here’s the thing. While staff needn’t say “FMLA” when requesting a leave under that law, courts have made it clear that employers aren’t expected to be psychic, either.

Would you understand the following to be a request for FMLA leave? He told his boss that he “couldn’t do it anymore” and “would turn [his] stuff in if [he] needed to.”

That sounded like a resignation to the city. And it took it as such.

Out of a job, he sued to allege the city violated the FMLA, as it should have understood he was only asking for a leave. But it sounded like a resignation to federal trial and appeals courts, too.

A federal judge granted the city judgment without a trial. The Eleventh Circuit affirmed.

Paramedics Do Many More Runs

Montgomery Fire/Rescue (MFS) in Alabama hired Kyle Blake as a firefighter in 2012. He completed the required training and certification. And he became a firefighter-paramedic in 2015.

MFS firefighter-paramedics answer a lot of calls. They do as many as 400 runs per month compared to firefighters’ 38 or fewer monthly runs.

In 2016, Blake asked to be a firefighter again. His request was approved but never carried out.

Two years later, a staffing shortage had firefighter-paramedics working more than ever.

In August 2018, Blake was working a scheduled 24-hour shift when his district chief told him he had to go on to work a 24-hour overtime shift.

That meant he’d work for 48 hours immediately before an already scheduled 48-hour shift.

Blake said he “couldn’t do it anymore” and “would turn [his] stuff in if [he] needed to.” The district chief asked if he’d be willing to write “a letter or put something on paper for him.” Blake said no.

In a memo to the assistant chief, the district chief reported their exchange. The chief added that he’d asked Blake if he intended “to work [two] weeks” and Blake said no. And he wrote that two MFS officers had called to say Blake was “severely burned out” and his “decision” was not permanent. He noted that he thought “the Command Staff would have no problem[ ] … moving [Blake] to an assignment that will give him some relief.”

The Misunderstandings Pile Up

Before Blake left the station that day, he followed the rules by confirming another paramedic would cover the overtime shift.

Blake thought that meant he’d work his next scheduled shift and that the MFS would transfer him to a firefighter job and refer him to the employee assistance program for additional help.

Instead, the assistant chief told Blake the next day that the MFS had “accepted [his] verbal resignation” and he must turn in his gear.

A city personnel form said Blake had resigned “NOT in good standing.”

The FMLA grants eligible employees up to 12 weeks of leave in a 12-month period for, among other things, “a serious health condition that makes the employee unable to perform the functions of the position[.]”

Blake said the city did both.

To state a valid interference claim, he had to show he he had a serious health condition and gave the MFS proper notice.

Blake knew the MFS’ procedures to request FMLA leave as he’d successfully followed them in the past.

Also, as a Florida federal court held in the 1995 decision Paasch v. City of Safety Harbor, the FMLA does not require employers to “divine unspoken (and even unthought) requests for leave.”

The Eleventh Circuit found: 1) Blake didn’t request leave for burnout, and 2) his saying he “couldn’t do it anymore” and “would turn [his] stuff in if [he] needed to” conveyed an intent to resign, not a request for leave.

… And So Does Retaliation Claim

To state a valid retaliation claim, Blake had to show: 1) he did something the FMLA protects from retaliation and 2) he suffered an adverse employment action because of it – here, being forced to resign.

But Blake couldn’t clear even the first hurdle as he never told anyone at work that he had an FMLA-qualifying condition and didn’t request leave for it.

The court added, “The mere fact that Mr. Blake faced a choice between comparable unpleasant alternatives (i.e., resignation and a continuing obligation to work overtime shifts) does not establish that his resignation was involuntary.”

The city was entitled to judgment.