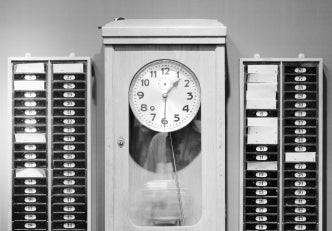 You know that one irritating guy who’s late for everything? He could be asking for an ADA accommodation soon.
According to a story from London’s Daily Mail, a man who has been late for everything in his life — from funerals to first dates — recently had his chronic tardiness diagnosed as a medical condition.
His penchant for lateness was diagnosed as a symptom of his Attention-Deficit Hyperactivity Disorder (ADHD) at a hospital in Dundee, Scotland.
Doctors there said the part of Jim Dunbar’s brain that’s involved in his ADHD also makes it difficult for him to judge how long it takes to do things — like get ready to go to work, apparently.
Dunbar said he didn’t mind his story being made public: ‘The reason I want it out in the open is that there has got to be other folk out there with it and they don’t realize that it’s not their fault.
‘I blamed it on myself and thought ‘Why can’t I be on time?’ I lost a lot of jobs. I can understand people’s reaction and why they don’t believe me.”
According to the Daily Mail story, some psychologists believe that chronic lateness could be a symptom of an underlying mood disorder such as depression, and many ADHD sufferers complain they struggle to keep time.

The Mail did note some skepticism of Dunbar’s diagnosis among the medical community.
Dr. Sheri Jacobson, psychotherapist and director of Harley Therapy Clinic in London, told the newspaper:

The condition isn’t in the DSM5 (the American Psychiatric Association’s Diagnostic and Statistical Manual of Mental Disorders) so I’m not sure you can really call it a condition …
Repeated lateness is usually a symptom of an underlying condition such as ADHD or depression but it can also just be habit.
I think making everyday human behavior into a medical condition is unwise.

We’d certainly agree with Dr. Jacobson. But ADHD can be a disability, correct? And getting to work on time could certainly fall into the category of major life activities.
So when will we see our first disability lawsuit from an employee who’s been axed for showing up late too many times?